The sordid revelations about Harvey Weinstein will have come as little surprise to those in academia.

There are manifold similarities between the arts and the sciences, and TIR takes great pride and pleasure in straddling – or trying to straddle – both worlds. However, another shared property of the two worlds, and an unsavoury one at that, is the potential for sexual harassment.

In science, as in the film industry, there tends to be an enormous asymmetry in the power relationships between the senior and junior members of the profession. It is also the case that those senior positions are, both in the past and up to the present, disproportionately filled by men (and older men, at that).

In both worlds too there is a very limited time window for the junior members of the profession to make their mark. In the arts, it is theoretically possible to become a star at any age (Bill Nighy’s film career being a good example), but for actresses in particular the chances of achieving widespread recognition after the age of 40 (possibly 30, even) are so limited that it is virtually impossible. In science, you can theoretically make your big discovery at any stage of your career, but that is dependent on securing the funding to keep your lab open all that time – and once you’re out, you’re out.

And in both worlds, there’s no shortage of young people to take the place of those who leave.

These elements – power asymmetry, gender imbalance, a limited time window in which to establish oneself, a lack of career security, and a large population of juniors with a high turnover rate – make a fertile bed in which abuse can proliferate.

The outpouring of filth concerning Weinstein’s conduct – alleged rape, coercion, harassment, abuse – resembles nothing so much as an overflowing sewer finally emptying its engorged contents over the pristine floor of the Hollywood home. Hamlet’s denunciation of “the rank sweat of an enseamed bed, stewed in corruption, honeying and making love over the nasty sty” never seemed so apt. And in science too, there are indications that the pressure on its own underground activities is beginning to build (1, 2, 3, 4, 5).

The reactions to Weinstein’s disgrace are telling. Was it an open secret, or was nothing ever seen? The impression, unfortunately, is one of people scrambling to explain themselves, and shield their own actions from accusations of blame or collusion by taking their turn to denounce the devil in their midst. Ben Affleck’s strident condemnation of Weinstein was almost immediately undermined when it was pointed out that he’d groped a TV host live on air (6).

The reactions are informative precisely because they show the enormous pressure in such environments to maintain the status quo. Given those power asymmetries, and the fact that the accusers are usually transient members of the scene who can easily be forgotten, it is all too simple to sink the allegations down the drain. Bluntly, it is more convenient to wait until an accuser moves on than it is to investigate a valued asset. In film, that fact acts to protect powerful producers who control multimillion-dollar budgets; in science, it acts to protect tenured faculty who bring in millions of dollars of research funds. There is consequently an institutional incentive (not duty, mind) to side with producers/faculty members in such cases.

What complicates matters further is that the abusers are people, and people are complex and multifaceted creatures that one can’t easily pigeonhole. Weinstein has clearly been responsible for a disgusting degree of sexual harassment and abuse, but one reason he could act with such impunity and why he was shielded from discovery was that he was a very, very good film producer. When film director Anthony Minghella died, easily the most moving and profound tribute was Weinstein’s – and it was a eulogy in which Weinstein’s own artistic sensitivity and sensibility shone through. That warm, humble, and generous eulogy is hard to reconcile with the same man forcing himself on young actresses and asking people to watch him masturbate, but that’s the complexity of personality for you.

Do people’s actions in their private life taint their work? It’s more of a problem for the arts, where the personality of the creator is more front and centre, than in the sciences, where objectivity is more prized. Austrian artist Franz Sedlacek provides a good example – his astoundingly underrated portfolio contains haunting, eerie pictures of academia in the European Gothic style, industrial plants juxtaposed with grassy landscapes, and fantastical insects drinking nectar from impossible flowers. However part of the reason for the portfolio’s neglect and still awkward resonance are that Sedlacek was a confirmed Nazi who disappeared fighting for the Wehrmacht on the Eastern Front in 1945.

Science though, for all its objectivity, is perhaps even more in thrall to the idea of genius than the arts. And another parallel between the two worlds is that it is tacitly understood that geniuses are permitted to be more unconventional in their behaviour; in science there is certainly more tolerance of unusual personality types and behaviours than in other professions – so long as the research dollars and publications keep flowing.

That toleration of unconventionality – something to be proud of, really – should not extend to tolerating abnormal and immoral standards of behaviour, and unconventional behaviour, as we’re learning, is not always benign.

Though there are widespread and multiplying accusations of harassment in science, there are no indications – yet – that anything resembling the “casting couch culture” of Hollywood, which allowed Weinstein to operate with such proclivity, exists in academia. However, because the power structures of the two worlds are so similar the same potential exists, so it is up to scientists to repel it, report it, and reject it. It’s high time. 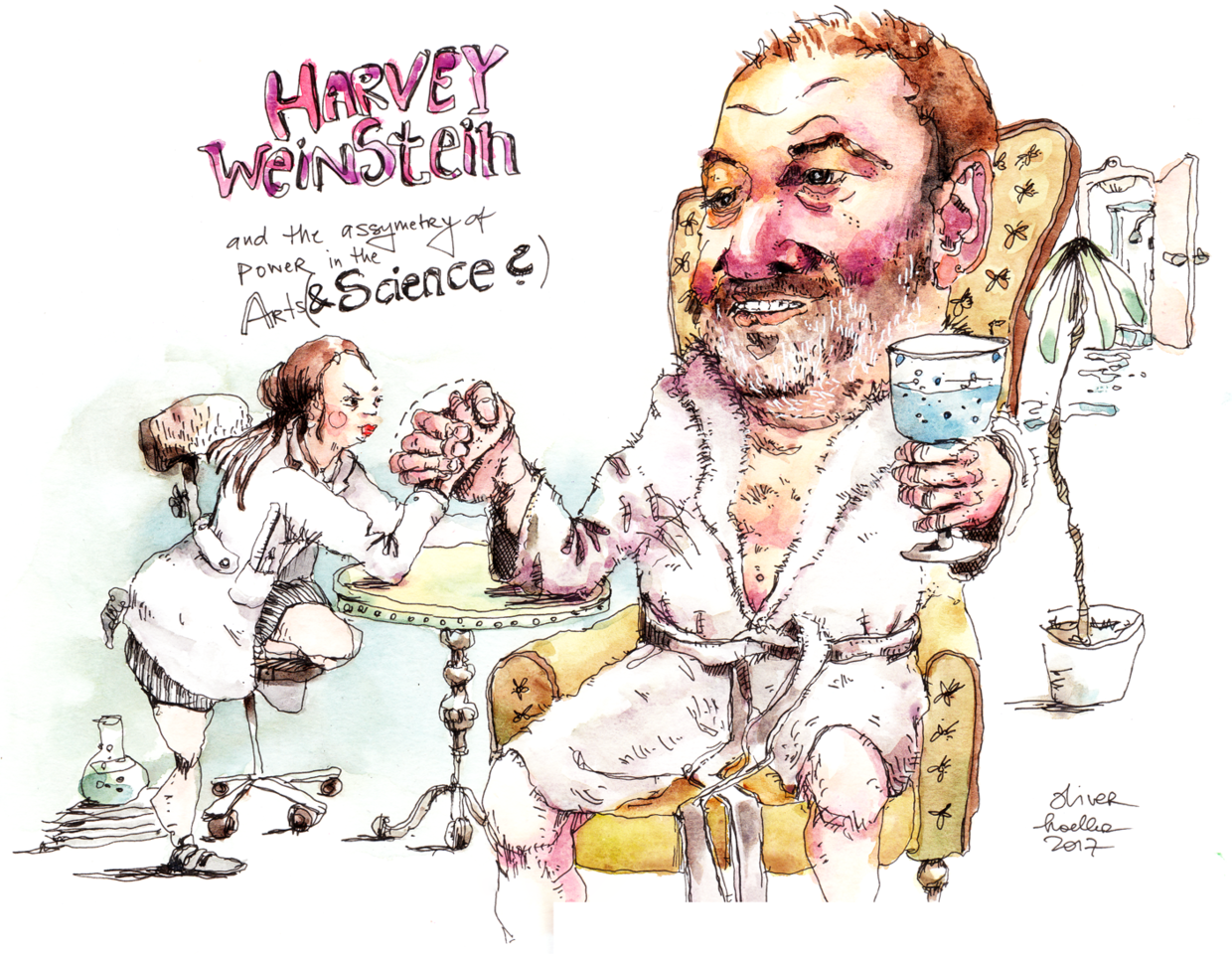