The Nobel Prize for Chemistry 2018 was awarded one half to Frances Arnold “for the directed evolution of enzymes”, and the other half jointly to George Smith and Gregory Winter "for the phage display of peptides and antibodies”. The recognition of Frances Arnold “for the directed evolution of enzymes” was very welcome. Her award, together with that of the Nobel Prize for Physics to Donna Strickland “for groundbreaking inventions in the field of laser physics” is a boost to the idea that more credit needs to be given to the women who have made major scientific advances.

As biochemists, we all know the name of Maud Menten who, with Leonor Michaelis, did much to establish the foundation on which enzyme kinetics has been built. She probably went to Berlin at her own expense, as there is no evidence that she had any financial support, and Leonor Michaelis (who had no academic appointment and no research funds) was not in a position to pay her. We have no way of knowing how much of the work was hers, but probably she contributed more than a pair of hands, as she already had a distinguished record before she went to Berlin, having worked with three of the greatest scientists of her time.

Biochemists tend to have heard of just one of her papers, but it was not the only one in which she made a major advance. She was, for example, the first to realize, several years before Linus Pauling’s far better known work, that electrophoresis could be used to distinguish between variant haemoglobins. Although she was probably the first woman to have contributed to constructing the modern edifice of biochemistry, she was by no means the only one: we should also remember Gerty Cori, Dorothy Hodgkin, Mildred Cohn (born in the year of Michaelis and Menten’s paper), Ruth Hubbard, Rosalind Franklin, and Louise Johnson, to name only some who have died.

Returning to 2018, what is Frances Arnold’s work, and why is it important? The directed evolution of enzymes involves successive rounds of selection of bacteria to generate new or improved catalytic functions. This has obvious applications for developing new drugs, such as sitagliptin, used for treating diabetes, which can now be produced using enzyme catalysis.  Directed evolution also has major applications in biochemical engineering, used, for example, for producing isobutanol, a bio-fuel of increasing importance, on an industrial scale: although Escherichia coli can produce isobutanol, it requires NADPH, but Arnold’s collaborators succeeded evolving mutants that can use NADH, a much better choice from an economic point of view.

Many biochemical engineers have tried to manipulate metabolic pathways for industrial purposes, to produce useful metabolites more efficiently, or to produce ones that do not exist in nature, but none have succeeded to the extent that Frances Arnold has done. Why should that be? Probably the most common approach, doomed to failure, is to think that overexpressing an enzyme believed to be rate-determining will lead to higher yields. That is, however, based on wishful thinking and ignores how metabolic pathways actually behave. I have never met Frances Arnold, though I have corresponded with her, and I knew her first husband James (“Jay”) Bailey. Sadly, he died of cancer not long after participating in a NATO meeting on Technological and Medical Implications of Metabolic Control Analysis that Marilú Cárdenas and I organized in Hungary in 1999. He spoke about the importance of taking account of how metabolic pathways really respond to changes in enzyme activities, that is to say, biochemical engineers should know the principles of metabolic control analysis.  This awareness of reality certainly helps to explain why Frances Arnold has been particularly successful.

In a very recent interview in Chemistry & Engineering News, she answered a question by saying that “To expect a Nobel Prize is silly because there are many people who could win a Nobel Prize, whose science deserves a prize at that level. And very few get it.” Maybe, but in her case it is richly deserved.

For more scientific background on the prize, prepared by The Royal Swedish Academy of Sciences, see: https://www.nobelprize.org/uploads/2018/10/advanced-chemistryprize-2018.pdf

Carsten Kettner
over 3 years ago

A wonderful laudation on Francis Arnold's efforts and implicitly skills when engineering enzymes towards novel properties and having the capabilities of metabolic netwwors in mind. Thanks, Athel. 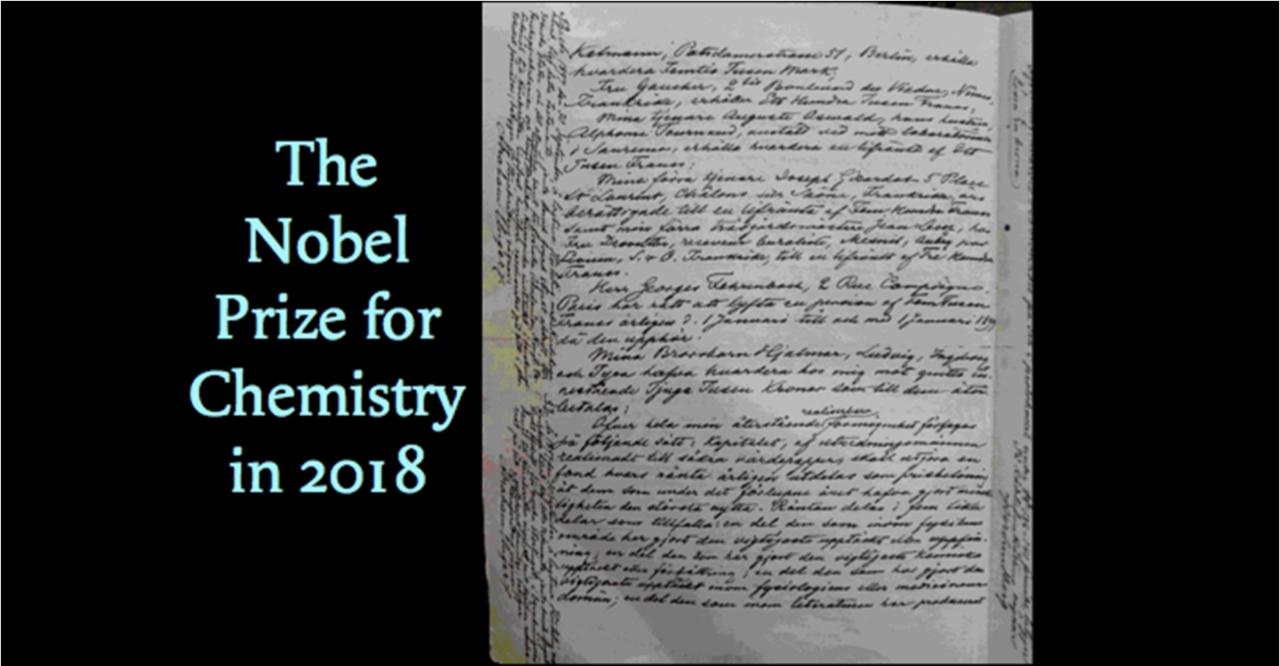