Gertrudis de la Fuente Sánchez played an essential role in the start and development of biochemical research in Spain at the international level. She carried out this task since the last 50 years of the 20th century in close association with Alberto Sols.
The Spanish Society for Biochemistry and Molecular Biology (SEBBM)
Follow
Like Liked by Angel Herráez
0

Gertrudis was born in Madrid, in 1921. She recounted her intense desire to study and get knowledge since childhood, notwithstanding the difficulties of those years and the rural environment where she was growing up. Due   to the professional relocation of her father, the family had   to move to a railway-related small village in the province of Caceres. Thus, it was not until 1925 -then back in Madrid- when she could start high school tuition that would not complete until being 21 years old, because of the Civil War. She graduated in Chemistry at the Complutense University of Madrid, already feeling a strong attraction for Biochemistry. In 1955, she received a PhD under the supervision of Angel Santos Ruiz in the School of Pharmacy at the above-mentioned University. Practically a self-taught scientist, she published part of her thesis work in Nature, this made her one of the first Spanish women -if not the first one- to publish in this journal. A chance encounter with Alberto Sols, led Gertrudis to irrevocably decide to devote herself to biochemical research, so that, she joined his emerging laboratory in the Medical School at the Complutense University. In fraternal and mutually acknowledged intense association with Sols -that continued throughout their lives-, she started the development of research endowed with international quality in our country. Effort and the honest pursue of truth -regardless of difficulties and without overemphasizing financial constraints-, were her arms.

After getting a position at the CSIC by public competition, she became a Research Professor in 1969. The research group moved to the recently founded Center for Biological Research, where it became the Institute of Enzymology. Shortly, the institute joined the Medical School at the Autonomous University of Madrid to take charge of biochemistry teaching and contributing to the launching of this newly established School, where Gertrudis was appointed as Honorary Professor. She actively participated in the foundation of the Spanish Society of Biochemistry and in that of the Federation of European Biochemical Societies.

Most of Gertrudis’s research focused on the mechanisms of enzyme catalysis and human disorders of carbohydrate metabolism. Among her most outstanding contributions, it should be noted the first experimental demonstration of the induced fit hypothesis of Daniel Koshland, according to which catalysis results from a shift in enzyme conformation upon substrate binding to the active site. She also pioneered in the translation of her experience with enzymes to the study of human medical processes, particularly those of inborn errors of metabolism, where she introduced diagnosis methodologies that were extended to hospitals throughout Spain. Her theoretic/practical training courses left a mark on the many clinicians who attended them. Additionally, she played a remarkable role as coordinator of basic research for the toxic syndrome caused by denatured rapeseed oil. She was also a member of de National Council for the Plan of Prevention of Mental Handicap.

She was appointed Commander of the Order of Alfonso X the Wise, Deputy Counselor of the Santiago Ramón y Cajal Board, awarded with the Prize of this Board, as well as with that of the Spanish Society of Cardiology for her contributions to this specialty. In 2013, she was awarded the medal of Honorary Member of the Spanish Society of Biochemistry and Molecular Biology. She retired in 1985 although continued working until 1991, when her professional activity finished.

Gertrudis de la Fuente was also a generous person, who enjoyed giving ideas to co-workers and was always ready with help to solve difficulties, even those of a material kind -not unfrequently at her own expenses. She was endowed with austere simplicity and a sharp critical capacity, whose attitude and teachings remain in all of us who knew her.

This article is the English translation of a Spanish version published by the Spanish Society of Biochemistry and Molecular Biology (SEBBM): https://web2020.sebbm.es/web/es/divulgacion/mujeres-ciencia/retratos/3417-especial-congreso-febs-69-gertrudis-de-la-fuente 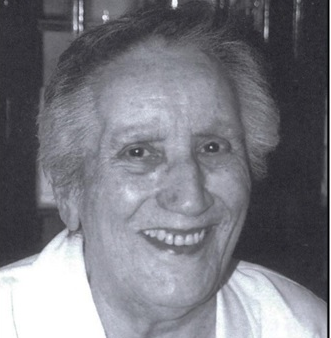 Gertrudis de la Fuente Sánchez played an essential role in the start and development of biochemical research in Spain at the international level. She carried out this task since the last 50 years of the 20th century in close association with Alberto Sols.