As scientists, we are used to frequently sharing our findings with colleagues through manuscripts, seminars or conferences. Likewise, some of us engage in science outreach and face the challenge to talk about our research to audiences who are often unaware of the details of our science and sometimes even the entire context of scientific endeavours. In this sense, my experience has, so far, perhaps been slightly more uplifting: I work on malaria, a disease that every year sweeps away the lives of up to 400,000 people, often children younger than five years old. Many people are familiar with the disease, though the seriousness of this global threat is often overlooked, especially because it usually does not affect Western countries. Thus, in my experience, I find it easy to connect with people when I explain why studying this disease is so important for humankind and for me as a scientist.

I often give talks to groups of 20–30 non-scientists, but recently one of the most interesting engagement experiences I’ve had arose thanks to the PRBB Open Day. The PRBB is the Barcelona Biomedical Research Park, a scientific hub that, among other institutions, hosts EMBL Barcelona, the intergovernmental organisation I work at. Every year, the PRBB opens its doors to welcome curious citizens who come and visit our labs and meet our researchers. This year, due to the pandemic, our doors could only be opened virtually during the last week of October (as described in an accompanying FEBS Network post here). In addition to coordinating a number of videos from different labs and scientists, the communication team at PRBB, in collaboration with the research centres it hosts, decided to explore a new avenue for talking to the public. One that, perhaps, science institutions are traditionally more reluctant to dive into: interviews with a social media influencer.

For those of you unfamiliar with the term, an ‘influencer’ is a person who has a certain credibility on a specific topic and who, due to his or her presence and influence on social media, can become a point of reference for many people. Influencers share on social media their particular vision of what they are passionate about, and this makes them able to set trends and even generate changes in consumer habits. Unlike traditional media, influencers are perceived by younger generations as free, casual and authentic, as compared to traditional journalists, who might be viewed as old-fashioned. For all of these reasons, influencers tend to talk to relatively large audiences of younger people who share their particular passion or interest.

Before the interview, I associated social media influencers with celebrities, fashion and show business, but there are, in fact, many types of influencers. Scientific influencers are certainly a bit niche, but they are becoming very popular among people with an interest in scientific topics. Many of them talk about a specific field or subject (mathematics, biology, archaeology, and so forth). Of course, the language is an important factor in access to their audience, and English is by far the language in which most content is shared. But other languages have a growing crowd of enthusiasts. The same is true for science. Several dozen Spanish-speaking influencers who love science reach hundreds of thousands of followers. For our Open Day, the idea was that speaking in Spanish we could reach a wider audience in Spain and Latin America, and spread the word of the world-class research performed at EMBL and the PRBB as a whole. There are hundreds of thousand people out there who are eager to listen to scientists, and I consider it our responsibility to make sure that they receive accurate and reliable information.

This is the reason why I enthusiastically accepted the challenge to me to engage in a live interview with the Instagram influencer La Gata de Schrödinger (Schrödinger’s cat), whose real name is Rocío Vidal. I was shocked when I saw that La Gata de Schrödinger had more than 100,000 followers on Instagram and Twitter, and more than 400,000 on her YouTube channel. La Gata de Schrödinger actively advocates for science and fights against recent waves of scepticism in science. Her videos often focus on uncovering pseudoscience with scientific arguments. When I talked about the interview to my family and friends, I was surprised that many of them knew La Gata and looked forward to the interview with enthusiasm. This excited and, at the same time, unsettled me. My interview was the first one in the series and I had no reference to look at for inspiration or guidelines. 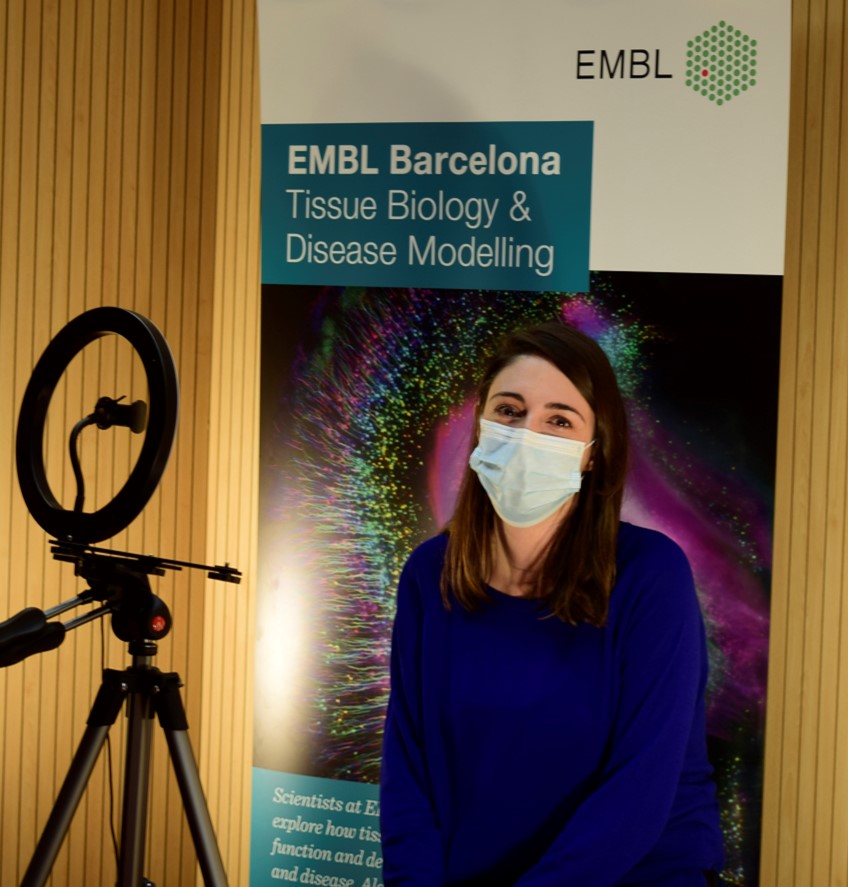 The interview took place at 19:00 on a Monday evening. Together with the PRBB and EMBL Communications teams I set up: in front of me I had only a phone in a holder that provided some lighting. Behind me was an EMBL banner with an image of a brain, and next to me were some of the pieces to fabricate our engineered blood–brain barrier models, and a 3D view of our engineered blood vessels ready to be shown to our live followers.

Although, at first, I was worried about the live experience, the butterflies disappeared quite quickly. There were only about 250 people watching the interview live. I’ve talked to larger audiences in person before! Overall, my experience during and after the interview was definitely pleasant. It felt more like a conversation with friends over a cup of coffee than a proper interview. We talked about malaria, COVID-19, vaccines, and my experience as a young woman in science. When the interview finished and I looked at the clock I was surprised. The chat took longer than we had planned, because clearly La gata was intrigued by the topics touched on. Another advantage of using social media for live broadcasts is that you are not as bound by precise timings – the followers can always watch the video at a later moment if they can’t be there at a given time.

After chatting with family and friends who had enjoyed the interview, I went to bed. When I woke up, one of the first things I saw was a text from the PRBB Communications team: in less than 12 hours my interview had already more than 10,000 views! 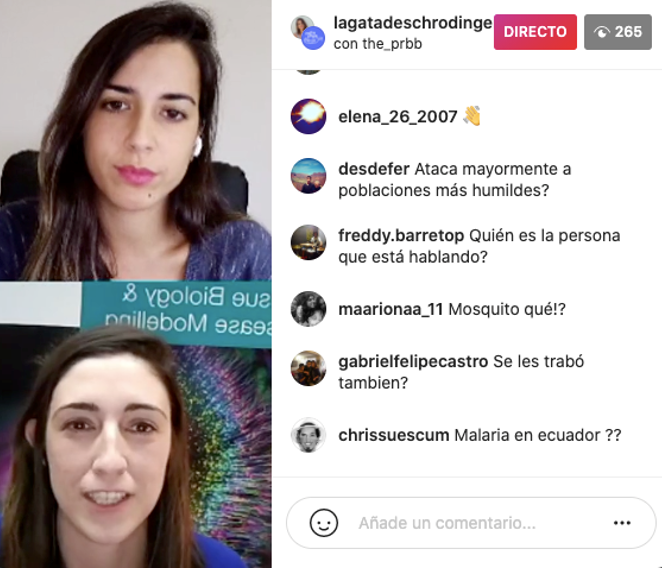 If you think about it, how many people can you reach in a traditional Open Day? Maybe a few hundred, if you are lucky. My interview so far has reached more than 25,000 people and counting – and most of them likely young people we would not have reached if it had not been for La Gata’s popularity. I was surprised about the engagement in the comments section, with many asking thoughtful questions or proposing similar interviews on her channel in the future. As scientists, we are not used to having this kind of audience, for a half an hour in-depth interview, except perhaps if we are recruited for an interview on national TV or radio, which, of course, is not very common. On the other hand, social media has an enormous potential that we can still explore.

As an avid Twitter user, I feel that influencers can be an effective tool to reach and engage a wide and young audience. With my tweets, I reach at most 4,000 people, mostly scientists in my research field. My Instagram interview with La Gata has given me the opportunity to talk to people who probably would have never considered turning on a TV to listen to me talking about Plasmodium falciparum, endothelial cells, astrocytes, blood–brain barrier and basic research, and not only people who live in Barcelona, but maybe also those in Mexico, Argentina, Colombia or Panama. This is incredibly powerful.

My suggestion to my scientific colleagues is to embrace new ways of public engagement. Don’t be afraid of it. Of course, there are some important factors to keep in mind. One is obviously the selection of your interviewer: make sure he or she is a credible partner for the interview. And don’t neglect the preparation of the interview. If your institute has a Communications department, they can probably help you out with outlining a few talking points, and advice on maintaining an engaging and spontaneous conversation with the influencer about your science. If possible, make sure that you have a brief discussion with the interviewer before recording to broadly outline the topics you want to highlight.

And importantly, you have to be the one who has to take the initiative to reach out. And you should. Conveying what we consider are essential messages about our research is not always easy. Some of us decide that it is not convenient to sell ourselves, that our contribution to society is far more relevant if we are sitting at our benches working with our experiments rather than taking time to look into a camera or speak into a microphone. I disagree. I feel that we have a duty to engage with society. Not only do we have to explain why we believe that what we do is important, but we also have to convince others that it is indeed relevant for society as a whole. I consider this is part of our job. We receive public money because society considers what we do as valuable and important, and we need to give back the knowledge we gain to the community. So, let’s embrace all means by which we can reach out to our families, our neighbours and the world’s citizens more broadly. 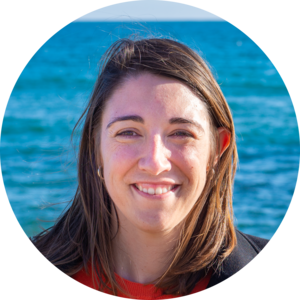