Keep children entertained during the lock-up at home, with a chance to practice science: A hands-on activity to find out about the coronavirus and build a model of its structure.
Ana M Bajo
Associate professor, University of Alcalá
Follow
Like Liked by Carolyn Elliss and 2 others
2

It is difficult that the youngest at home are not victims of discouragement and boredom at some point during the confinement we are experiencing. They are continuously listening to news about the Covid-19 disease: infected, asymptomatic, confinement, research, vaccines, deaths, etc. However, they know little about this coronavirus so special for them.

The experience that I proposed to my 9 years old daughter helped us to better understand the SARS-CoV-2 virus through its structure. To know about its "physical appearance" would help us better understand how it acts.

The proposed activity was carried out collaboratively in the family. First, I introduced her to the virus world with the Spanish translation of Arthur Kornberg’s tale Germ Stories1,2. Afterwards, we did an internet search for images of the new virus, choosing reliable pages. Once we found what its “appearance” was, we set down to work. For this, we used a hollow plastic ball (which had contained a gift inside), modelling clay of different colors, brushes and fixing varnish.

Great to interest children in Biochemistry!. 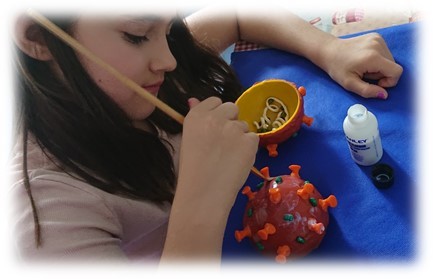 Keep children entertained during the lock-up at home, with a chance to practice science: A hands-on activity to find out about the coronavirus and build a model of its structure.