How might the underrepresentation of politicians with scientific backgrounds affect policy making on scientific issues? A recent study in the UK by Joshua Myers and Hilde Coffé indicates British Members of Parliament with STEM backgrounds are more likely to prioritise STEM policy issues.

With the looming dangers of climate change, the healthcare challenges posed by an ageing population and the ever-increasing ubiquity of digital technologies, scientific knowledge and understanding has never been more important in British politics than today. However, some commentators argue a lack of scientific expertise and interest among parliamentarians has resulted in these crucial policy issues being consistently relegated to the foot of the political agenda. Indeed, somewhat notorious policy failures on issues such as mad cow disease, genetically modified foods and COVID-19 have cast doubt over whether politicians pay enough attention to scientific issues, or have the necessary skillset to tackle them wisely. Our research suggests that an underrepresentation of those with STEM (Science, Technology, Engineering and Maths) backgrounds in Parliament may be an explanation.

The British Parliament has long been dominated by humanities graduates at the expense of those with a background in STEM. In the 2015-2017 Parliament – which was the focus of our study – only 93 (17%) of the 541 MPs with higher education degrees held degrees in STEM subjects. For comparison, 46% of UK students in 2019 graduated in STEM subjects. Moreover, only two MPs held PhDs in STEM subjects. 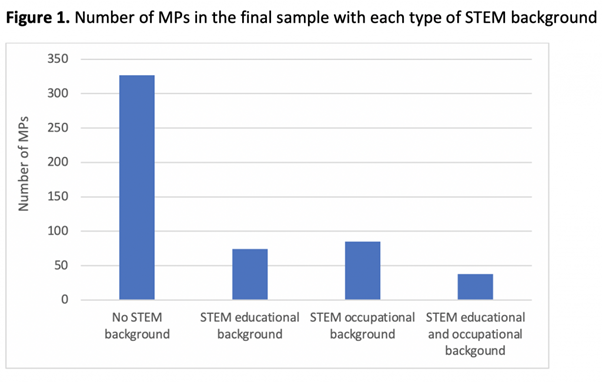 A series of multivariate regression analyses (controlling for MPs’ gender, age, party affiliation, (shadow) ministerial roles and parliamentary experience, alongside the urbanization of, and levels of education in, their constituency, and the total number of PMBs they proposed in the Parliament) revealed that having a STEM background has no significant effect on the likelihood of an MP proposing at least one STEM PMB. However, MPs with both an educational and occupational background in STEM dedicated a higher proportion of their PMB proposals to STEM issues. All other things being equal, an MP with a STEM educational and occupational background is likely to offer 35% of their PMB proposals to STEM-related bills compared with 25% among those without such background. It therefore seems that MPs entering Parliament with significant STEM experience are more inclined to prioritise STEM policy issues. 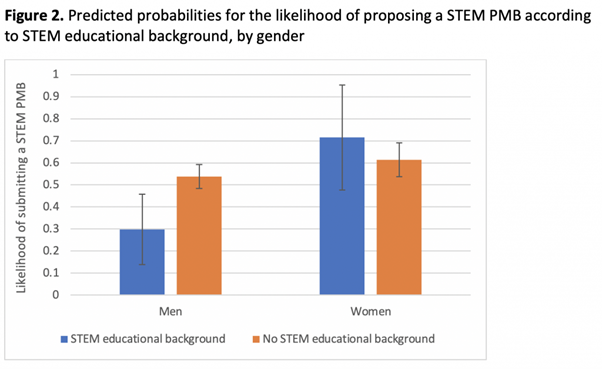 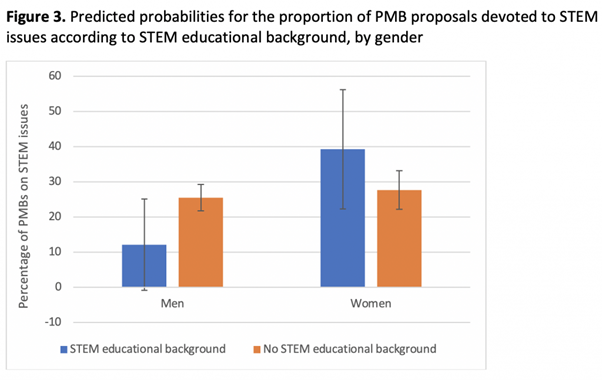 We suggest two reasons why these gender differences may exist. Firstly, long-standing and insidious gender stereotypes have represented a persistent barrier to women and girls studying STEM subjects and entering STEM occupations. Consequently, we hypothesise that women with backgrounds in STEM may often be more passionate about STEM issues than men who have not had to overcome such barriers. Therefore, women MPs with STEM backgrounds may simply have entered Parliament with a greater interest in STEM issues than men with STEM backgrounds.

However, these gender differences may also result from the types of STEM backgrounds held by men and women MPs. Women MPs in the 2015-2017 Parliament were significantly more likely than men MPs to have an educational or occupational background in the life sciences or healthcare. Whilst 13% of women MPs in the sample worked in an occupation related to life sciences and 11% studied life sciences subjects, the equivalent figure for men is 3% on both counts. Meanwhile, the majority of STEM PMBs (38 out of 58) proposed in the Parliament related to life sciences, most notably healthcare policy. Therefore, women MPs with a STEM background are perhaps more likely to prioritise STEM issues as they are more likely to have expertise and interest in the life sciences issues which are most prevalent on the policy agenda.

Overall, we conclude that STEM MPs are more likely to prioritise STEM issues than the median MP. This highlights the importance of improving diversity in parliament, also in terms of educational and occupational backgrounds, and of getting more STEM experts in politics. Some of the most pressing issues of our time are inherently ‘scientific’ in nature, from tackling climate change and food insecurity to preventing future pandemics and harnessing technological advance for good. To address these issues appropriately, we require passionate and knowledgeable STEM advocates working at the heart of our politics and championing STEM issues in Parliament.

This post is an update of a post first published in the LSE Impact Blog by Joshua Myers, Postgraduate Student, Department of Geography, University College London and Hilde Coffé, Professor in Politics, Department of Politics, Languages and International Studies, University of Bath.

Image by Bidyut Das from Pixabay 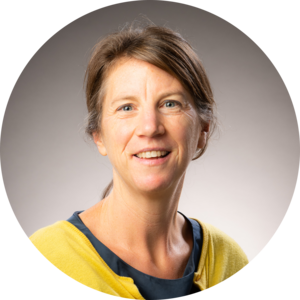 Prof. in Politics, University of Bath