This is a translation of an article I wrote in Spanish, published in The Conversation-E on June 15, 2021: https://theconversation.com/la-multicelularidad-fue-una-de-las-mayores-innovaciones-de-la-evolucion-como-se-origino-161629

The diversification of cell function, i.e. cell specialization, is the result of one of the most important evolutionary transitions in the history of life. Multicellularity is a form of biological organization in which cells have a more complex activity than individual cells. Surprisingly enough, it appeared independently in several groups of eukaryotic organisms. Examples include the distinction between single-cell algae (e.g. Chlamydomonas reinhardtii, Ostrococcus tauri) and multicellular algae that form colonies (i.e. Volvox carteri). Despite the importance of this transition from unicellular to multicellular, the evolutionary or molecular mechanisms, or both, that led to the emergence of plants and animals from their unicellular ancestors remain largely unknown. Their relationship to eukaryogenesis, i.e. the process that gave rise to eukaryotic organisms from a prokaryotic one, is also a topic of discussion straddling science and philosophy that naturally goes beyond the scope of this article.

Progress in cellular, molecular, structural and computational biology in recent years has provided insight into some of the mechanisms underlying this important transition. At the cellular level, single cell capture technologies and methodologies for genomic and transcriptomic analysis of single cellular entities have made it possible to explore the functions associated with each cell type at an unprecedented level of detail. At the molecular level, knowledge of the structure and function of proteins involved in cell division, adhesion and communication in different organisms, as well as computational and empirical analysis of the role of intrinsically disordered proteins (IDPs) and ductile regions in these cellular mechanisms, have also been very important.

We now know many details of the evolution of the assembly of cell modules from bacteria to plants and vertebrate animals, the origins of different cell types, cell diversification in divergent animal and plant lineages, and the genetic and epigenetic regulatory networks that control cell differentiation and specialization in different tissues. This information allows us to reconstruct cell development in animals and plants during evolution, as well as different aspects of neuronal identity and the diversification of sensory and neuronal cell types in vertebrates. This is a very active field of study in recent years. Expert researchers meet in the series of symposia "The Identity and Evolution of Cell Types" organized by EMBL | EMBO. The last one was held in virtual format in May 2021.

We have also learned that the increase of flexible regions in proteins and the increase of ductile proteins in proteomes contribute to cell diversification and multicellularity. Ductile segments are more frequent in the proteomes of multicellular organisms than in those of prokaryotic organisms (i.e. bacteria) and unicellular eukaryotes. One of the hypotheses that would explain this higher frequency is linked to the particular characteristics of the eukaryotic genetic machinery. Ductile regions are abundant in the sequences of regulatory proteins that act in the transcription of genes (transcription factors). It is estimated that 80–90% of their sequences contain long segments of low structural complexity, i.e. ductile regions. Computational analyses indicate a strong positive correlation between the increase in the number of cell types in organisms and the increase of flexible regions in transcription factors involved in cell division, proliferation, adhesion and communication. These processes underlie multicellularity itself. Ductile regions combine along the sequence of a protein with structured regions (alpha-helices, beta-sheets), providing, on the one hand, stability to protein folding and, on the other hand, the flexibility and plasticity that explain its function. The flexible regions, given their high adaptability, are often involved in recognition and binding with other biomolecule travel partners in the cell (DNA, RNA, proteins, lipids, sugars, metals, ions, among others), an essential aspect in transcription factors and other regulatory proteins.

But it is not only the increase of ductile regions in transcription factors that contributes to multicellularity. The phylogenetic construction of histone deacetylase enzymes (HDAs) from their ancestors, i.e. cyanobacteria, to flowering plants shows a gain in ductility and flexibility in their structures during evolution. In particular, this increase is observed in those HDA enzymes that are essential in the regulation of gene activity and epigenetic changes related to cell development. The flexible regions are located in the extensions that these enzymes have at their ends and that give rise to the formation of multi-protein complexes and complex regulatory networks in cells. Examples are also found in filamentous cyanobacteria. The SepJ protein, required to maintain the intimate junction between the cells forming the filaments, contains long ductile segments enriched in proline, serine and threonine amino acids. These interact with the cell membrane and with other proteins active in cell division and communication that control filament length.

Another important feature contributing to this evolutionary innovation – cell diversification and multicellularity – is the splicing process that messenger RNA (mRNA) undergoes after gene transcription, resulting in mature RNA and the corresponding protein. This mechanism is unique to eukaryotic organisms and some viruses. Approximately 50% of human genes give rise to proteins through a cleavage and splicing mechanism. Through this process, one gene can give rise to several proteins, which contributes to increased diversity of the proteome and greater functional versatility in the cell. Proteins that result from mRNA cut-and-splice processing tend to contain a significant number of ductile regions, and this type of mechanism is most likely to occur in mRNA regions encoding IDP proteins. Flexible regions in proteins are often subject to post-translational modifications, especially phosphorylation, another feature that contributes to the diversification and complexity of cells.

In conclusion, the multifunctionalities conferred by ductile proteins or the combination of flexible regions with mRNA splicing and splicing processes and post-translational modifications have contributed significantly to the evolution of multicellularity in most eukaryotic organisms. 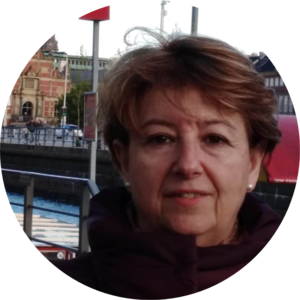 Dr. Inmaculada Yruela graduated and earned her doctorate in Chemistry at the University of Sevilla (Spain). She has been a visiting guest scientist at the Max Planck Institute for Chemical Energy Conversion in Mülheim an der Ruhr (Germany) and at Department of Biochemistry and Molecular Biology in Indiana University School of Medicine (USA). She is research scientist at the CSIC and group leader at Computational and Structural Biology in Estación Experimental de Aula (CSIC), Zaragoza (Spain). From the early 1990s she has been studying the relationship between the structure and function of proteins, and more recently the role of intrinsic ductiliity and plasticity of proteins in organismal complexity, multicellularity and evolution. She has led science outreach projects. She is currently member of SEBBM committee.
Follow