Santiago Ramón y Cajal was born in 1852 in Spain. He grew up to become a medical doctor and Professor of Histology and Pathological Anatomy, but today is widely recognised as someone who really saw neurons for the first time. From 1880, Cajal published a series of scholarly articles and books in which he described many of the neuroanatomical structures we take for granted today, showing that the nervous system contained a series of individual cells, neurons, connected by what we now know are synapses. He discovered dendritic spines, identified the process of axonal growth in response to guidance cues and described what happens when neurons are damaged, winning the Nobel Prize for Physiology or Medicine in 1906.

What most of us think of when we hear his name, though, is the drawings. During his career, Cajal drew a few thousand pictures in pen and ink. This was of course long before the super-resolution microscopy we use today and yet these beautiful pictures, with their intricate detail, are instantly recognisable to modern-day neuroscientists.

In 1920, 14 years before Cajal died, the Cajal Institute was founded. It remains the largest neuroscience research institute in Spain, and houses all Cajal’s exquisite drawings. The year 2020 will doubtless be remembered for other reasons (of which more below) but it also represents the centenary of the founding of the Cajal Institute, and celebrations were planned to take place at the FENS (Federation of European Neuroscience Societies) Forum in July in Glasgow, Scotland. In conversation with Jane Haley of Edinburgh Neuroscience (a virtual Neuroscience institute at the University of Edinburgh, Scotland) I wondered if it might be possible to create a large tribute piece, made up of embroidered versions of some of the drawings, which would then be assembled into a large textile piece. The individual panels would be made by a team of volunteers, both scientists and stitchers. The initial idea was to exhibit the final piece at the FENS Forum. Of course, Covid intervened but the project took wings and will, we hope, make a beautiful and lasting tribute.

Obviously stitching together many random bits of embroidery would be challenging, and hard to make into a coherent piece, so what was the plan? I wrote out some instructions aimed at entry-level stitchers, and we asked people to make their panels a set size and use a colour palette for fabric and threads that would reflect Cajal’s drawings – essentially cream/brown/black. To give the piece some coherence, I put together a (very) rough plan and we asked people to sign up so that we would end up with nine embroidered versions of each of the nine drawings and a finished piece just over two metres by two metres. It was important that the final piece be of a manageable size in terms of construction and portability, in the hope that it could ultimately be exhibited in a range of venues.

Volunteers came from all walks of life and corners of the globe – some neuroscientists new to sewing, some artists new to neuroscience, in other cases neighbours or even schoolfriends of neuroscientists who just liked the sound of the project. All were attracted by the idea of a community project and the challenges variously of teaching themselves to embroider or of learning about the brain. Slightly disappointingly, but not perhaps surprisingly, every volunteer was female, but by no means all were from Europe – we had contributors from as far afield as the USA and Australia.

At this point of course, Covid intervened and just as everyone started planning their pieces, we went into lockdown. People found imaginative ways to circumvent the shop closures: using a window in place of a lightbox to trace the drawing and sending each other threads and fabric. In one lovely instance a contributor borrowed a neighbour’s late mother’s sewing basket only to learn that the basket owner had been a member of the Embroiderers’ Guild. A ceramics professor from the USA, Annie Campbell, noted the difficulties of teaching ceramics online and the pleasure of finding an alternative artistic outlet. She had been making beautiful sculptures based on Cajal’s drawings and, inspired by her son’s experiences with a rare neurological disorder, brought this into her embroidery, incorporating silver thread to convey the idea of electrical impulses.

So which panel did I choose? Well, I work on a neuronal translation elongation factor called eEF1A2. Mutations in this gene cause epilepsy and intellectual disability, but can also cause movement disorders, and we had just been looking in more detail at brain sections visualising expression of eEF1A2. We saw really high levels of expression in the cerebellum, and particularly in Purkinje cells, so that’s what I chose to stitch. You can see some of the images, including the short video made for FENS Forum, on the Edinburgh Neuroscience website here. We are nearly there – still a few panels short but very close to the full 81, at which point the real work of assembly will start. We hope to be able to display the final work in a variety of locations, and photographs of some of the individual panels will even be gracing the cover of Lancet Neurology.

I hope Cajal would be proud to know that he was still such a source of inspiration, and not just to neuroscientists! 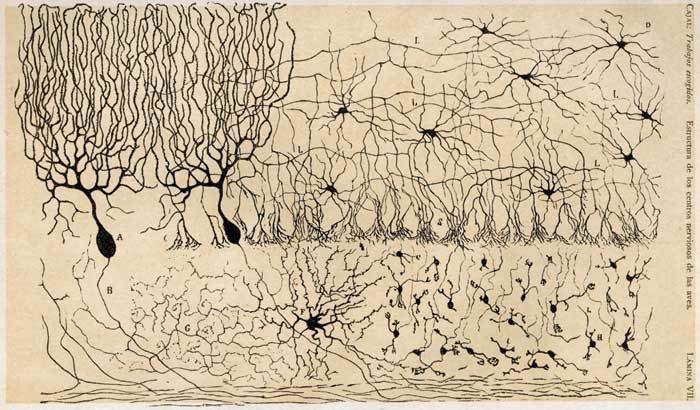