Albert J.R. Heck, who will be awarded the 2018 Sir Hans Krebs medal from FEBS at the 43rd FEBS Congress in Prague, provides a glimpse into his work at the forefront of biomolecular mass spectrometry
FEBS Communications
Follow
Like Liked by Andreas Hartig and 1 other
0

What has been the impact of mass spectrometry on understanding in the biosciences?

The technique of mass spectrometry goes back more than a century as it evolved from a technique used in physics, i.e. the discovery of the electron and isotopes by J.J. Thomson in the first part of the 20th century, to the field of chemistry in the second half of that century to determine for instance impurities in crude oil. It was only at the end of the 20th century that mass spectrometry entered the life sciences, largely through the development of electrospray ionization by John Fenn. This created the fields of proteomics and mass spectrometry-based structural biology. Largely through mass spectrometry-based approaches we now have a much better insight into the structural and functional organization of the molecular entities inside living cells. We now know that they “communicate” through post-translational modifications and interact through physical and/or transient interactions. This much improved view bridges cell biology with molecular biology: we don’t look at cells any more ignoring the molecular players that are the acting entities, and we don’t look at the molecular players any more in isolation but put them in their cellular context. After 50 years of applications in physics, then 50 years in chemistry and now in biosciences, I think the next phase will see mass spectrometry become an even more prominent technology directly in medicine and in the clinic.

Tell us about one of your favourite published papers

To pick your favourite paper is as difficult as picking your favourite child – each one has its own characteristics. Still, if forced to pick one, our recent Science paper on the Kai complex that regulates the circadian rhythm in cyanobacteria comes to mind as a favourite piece of work. From the technology side we combined therein various mass spectrometry approaches, i.e. native mass spectrometry, HD exchange mass spectrometry and cross-linking mass spectrometry, and further studied the protein complexes by cryo-electron microscopy and molecular modelling – resulting in a showcase on how hybrid technologies in structural biology can better solve important biological questions. From the biology side the system we studied is extremely fascinating. These cyanobacteria have a circadian rhythm just like us humans, but theirs is regulated by a relatively simple protein machinery. The most fascinating aspect for me is that evolution seems to be able to create different “optimal” solutions for a given problem: both humans and these bacteria have to deal with day and night rhythms, but found very different solutions. The work took us about 5–6 years with a dozen people involved over different labs, so I think it is also a showcase for modern science.

This is a question that I’ve often been asked, so for me it is like the famous chicken and egg question. I have witnessed that so many breakthroughs in biology have only come around by a new breakthrough in technology – so I have become biased towards technology. Sometimes technologies are developed for which applications are not yet found. A story out of our own lab corroborates that. We developed 5 years ago a new method to sequence peptides, making a combination of collision-induced dissociation and electron-induced dissociation, which we termed EThcD. I was/am very fond of this method but initially for tryptic peptides (mostly studied in proteomics) it did not really outperform the existing methods, and not many (i.e. none) of my colleagues shared my enthusiasm. However, when we started to apply this new fragmentation method to glycopeptides, HLA/MHC peptides and cross-linked peptides, it outperformed the conventional methods by several factors. For HLA peptides it not only allowed us to boost the identification rate by a factor of 3, but also our much better spectra and sequencing data allowed us to uncover widespread proteasomal splicing during the formation of MHC peptide presentation. This was a true breakthrough in immunology with even an impact on cancer immunotherapy. The initial technology advances were published in a specialized journal (ACS Anal Chem), whereas the biology breakthrough appeared in Science. I am not prouder of one of these papers over the other – I really like the process behind the complete story.

What do you look for when selecting students and staff for your research group?

I do believe in a very open lab atmosphere, wherein people coach, motivate and criticize each other. I am just one of the players in this process, and all players have equally important roles. I therefore look for motivated people who fit in such an atmosphere, like to be challenged by me, but also challenge and criticize me. Therefore, candidates in our group are not only  selected by me, but by the group.

I find it fun to explain our work to non-scientists but have also learned that trying to do this with experts outside your work can be very positive. I have had the pleasure to work with real artists and creative movie makers, and interacting with these people can lead to very nice products that maybe best bring the excitement of our work to non-scientists. I think the movie we made about proteomics is a showcase for that. The scientific message is good, but it is also, in my view, a beautiful artistic movie (see link below) which has been watched by over 15,000 people and even been featured on the The Washington Post webpage.

Albert J.R. Heck’s group focuses on the development and applications of advanced mass spectrometry-based technologies and instruments for proteomics and structural biology. His contributions to proteomics technologies include the efficient enrichment of phosphopeptides, novel proteases for digestions and novel fragmentation methods for protein and peptide sequencing. Heck’s proteomics research focuses for a large part on cancer, stem cells and immunology. Complementary to the proteomics efforts, his group is also known for its specific expertise in the mass spectrometric analysis of intact proteins and protein complexes. He has therefore developed dedicated instruments, with most recently a new modified Orbitrap with extended mass range that can be used for native mass spectrometry and top-down (glyco)proteomics. His research in mass spectrometry-based structural biology focuses on virus assembly, therapeutic antibodies, transcription complexes, circadian rhythms and CRISPR-related protein assemblies.

The Sir Hans Krebs medal is awarded annually by FEBS for outstanding achievements in Biochemistry and Molecular Biology or related sciences: www.febs.org/our-activities/awards/medals

Albert Heck will be presented with the medal at the 43rd FEBS Congress in Prague, Czech Republic on Sunday 8th July where he will deliver a lecture on ‘Higher-order organization of the proteome explored by mass spectrometry’: 2018.febscongress.org 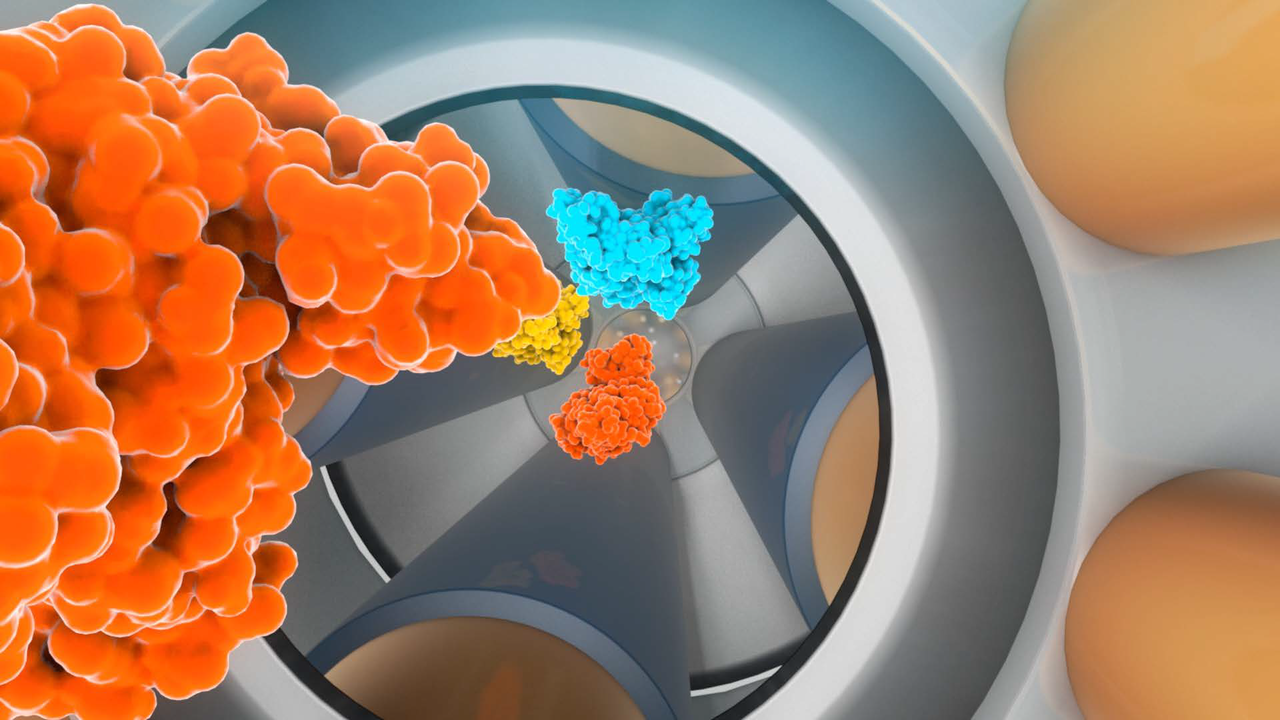 Albert J.R. Heck, who will be awarded the 2018 Sir Hans Krebs medal from FEBS at the 43rd FEBS Congress in Prague, provides a glimpse into his work at the forefront of biomolecular mass spectrometry