Several research studies and a review article published in the April Issue of Molecular Oncology investigate the role of microbes in human cancer and in cancer therapy. The focus of the issue was selected in support of the EMBO| EMBL symposium on Microbial infections and human cancer therapies.
Molecular Oncology and Ryan Griffiths
2 contributors
Like Be the first to like this
0

Within the scientific community, in light of the advancement of various sequencing and ‘omics’-based approaches, there is a greater focus on uncovering the roles of the largely unculturable microbial population humans play host to. The human microbiome, comprised of bacteria, fungi, archaea, viruses, and other microorganisms, has been identified as an important modulator of human health and disease [1]. It was estimated that 15% of all cancers may be caused by microorganisms, for example Heliobacter pylori infection is attributable to 89% of non-cardia gastric carcinoma world-wide [2]. Therefore, it is important that mechanistic studies focused on causative agents of cancer, cancer comorbidities and potential therapeutics consider analysis of the related microbiological components. In the April 2022 issue of Molecular Oncology, we aim to draw attention to the influence of viruses on colorectal cancer, relationship between gut microbiome composition and cancer immunotherapy, as well as the role of a novel signalling axis involving bacterial endotoxins in breast cancer development.

In their review article, Marongiu and Allgayer (2021) describe the carcinogenic properties and the potential role of different viruses, bacteria and phages in colorectal cancer (CRC) [3]. Epstein-Barr virus (EBV) has a prevalence of 90% in the adult human population and has been also detected in CRC tissue biopsies. EBV derived molecules may be trafficked to epithelial cells via microvesicles from their B-lymphocyte reservoir, thus potentially contributing to CRC progression in a variety of ways; as for example, through cell cycle modulation by the EBNA1 viral protein. Similarly, to EBV, cytomegalovirus (CMV) may also hamper cellular functions when infecting a range of host cell-types, including the intestinal epithelium and diverse immune cells. Infection with CMV has often been reported to promote angiogenesis in the context of wound healing, as well as cell proliferation and pro-inflammatory signalling in CRC cells. In addition to the well-established role of human papillomavirus (HPV) in anal carcinoma, the HPV viral oncoproteins E5, E6 and E7 have been also predicted to influence CRC. Polyomaviruses, such as the John Cunningham virus can establish a life-long asymptomatic infection in kidneys, tonsils, bone marrow and brain, where successful replication of the virus is largely dependent on the multiple roles (DNA replication, transcription, and virion assembly) of large T antigen (TAg). Viral replication modulated by TAg can also result in recruitment of the host cellular replication machinery in CRC cells leading to chromosomal instability and cell-cycle perturbation. Taken together, Marongiu and Allgayer (2021)have summarised the molecular mechanisms of how common DNA viruses contribute to CRC carcinogenesis and metastasis. In addition, the gastrointestinal tract is a host to a diverse phage population which has also been identified to contribute to cancer progression through modulating the bacteriome to indirectly promote expansion of bacterial species that may impact intestinal permeability, or inflammatory regulation.

Host-microbiome interactions were further explored in the context of cancer immunotherapy-induced colitis by Masatoshi et al. (2021) [4]. Monoclonal antibodies targeting immune checkpoints, known as immune checkpoint inhibitors (ICIs), are reported to enhance T-cell antitumor functions, and are already used in the clinic to treat a wide range of cancers. However, these therapeutic agents are also associated with manifestation of immune-related adverse events (irAE) in the gastrointestinal (GI) tract. Since the gut ecosystem has a major influence on the host immune function, pathologies, as well as treatment responses, the authors of this study investigated the association between microbial composition, irAE and ICI treatment. The data showed that favourable outcomes to ICI therapy (that is defined by Response Evaluation Criteria in Solid Tumors was associated with moderate colitis and gastrointestinal irAE. Particularly, taxa belonging to the family of Enterobacteriaceae were associated both with favourable response to ICIs, and with subsequent successful management of GI irAEs. Thus, microbial profiling may be predictive of the efficiency of ICI treatment in patients with cancer.

Whilst a large proportion of the human microbiome is gut derived, commensal bacteria can also be found in mammary glands, where they may play a role in breast tumour growth. Ganju et al. (2021) showed that the breast tumour microbiota was primarily enriched with gram-negative bacteria (up to 75%), which were the source of lipopolysaccharide (LPS) - a highly immunogenic endotoxin [5]. The presence of LPS increased the expression of the microbicidal S100A7 protein in breast tumours, which negatively correlated with toll-like receptor 4 (TLR4) expression. Downregulated TLR4 in turn increased the expression of receptors for advanced glycation end-products (RAGE), which mediated an oncogenic effect by activating NF-kB in breast cancer cells. The data highlights previously neglected cancer microbiota signalling components and the role of the LPS/S100A7/TLR4 signalling cascade within the breast tumour microenvironment. 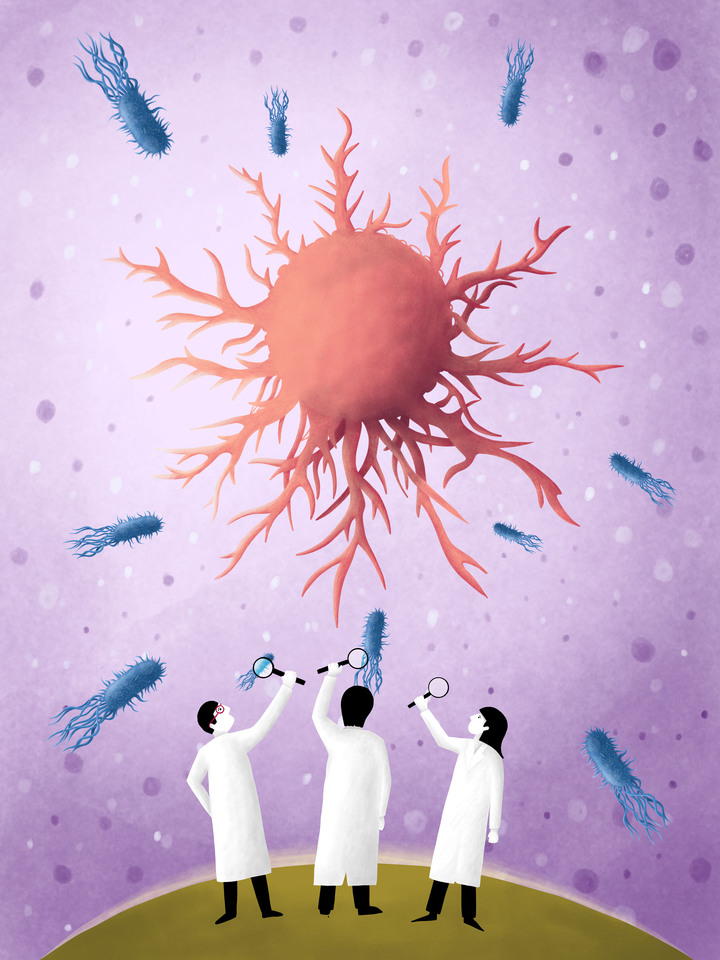 Several research studies and a review article published in the April Issue of Molecular Oncology investigate the role of microbes in human cancer and in cancer therapy. The focus of the issue was selected in support of the EMBO| EMBL symposium on Microbial infections and human cancer therapies.