Two recent studies in Molecular Oncology have shed light onto the metabolic stimuli that tumour associated macrophages (TAMs) are exposed to in the tumour microenvironment and characterised TAM heterogeneity and functional adaptations along cancer progression.
Molecular Oncology
Follow
Like Be the first to like this
0

The tumour microenvironment (TME) refers to all dynamic interactions of cancer cells with immune and stromal cells over tumour progression. Tumour-associated macrophages (TAMs) are present in the TME and are generally known to contribute to tumour progression.

Two Research Articles in the latest issue of Molecular Oncology, explore TAM heterogeneity in the TMEs of ovarian cancer and glioblastoma during tumour progression. Hammoud et al. (1) aimed to identify how TAM profiles are shaped in the TME of ovarian carcinoma by a bioactive lipid, arachidonic acid (AA). Elucidating the immunosuppressive mechanism of AA may provide novel targets for therapeutic modalities against ovarian carcinoma. Pires-Alfonso et al. (2) mapped TAM heterogeneity in glioblastoma in the presence and absence of Aconitate decarboxylase 1 (ACOD1), a metabolism-related gene previously implicated in immune regulation and tumour progression.

Hammoud et al. analyzed the transcriptional profiles of primary monocyte-derived macrophages (MDMs) following treatment with the pro-inflammatory cytokines IFNβ, IFNγ, or IL-6 and in the presence or absence of AA. AA suppressed IFN signalling at the early stages of ovarian carcinoma, preventing STAT1 phosphorylation on Tyr-701 and IFN-induced nuclear shuttling of STAT1/3. This promoted an anti-inflammatory, pro-tumourigenic TAM phenotype.

Cytokine signalling is initiated following the activation of cytokine receptors, which are often found in protein clusters of the plasma membrane, the lipid rafts. Proteomic analysis of isolated lipid rafts from MDMs treated with AA indicated that AA diminished the abundance of cytokine signalling-associated proteins (including ‘interferon signalling’- associated proteins). Through a series of biochemical experiments, authors showed that AA in the TME could partially induce removal of IFN-signalling-associated proteins from the membrane phospholipid bilayer, hindering pro-inflammatory activity and safeguarding cancer cells.

Pires-Alfonso et al. isolated individual cells from brains of mice with glioblastoma at different stages of the disease as well as of non-tumour bearing mice, and used single-cell RNA sequencing to profile transcriptional differences. Two different clusters of TAMs were identified: a microglia-like (TAM I) and a macrophage-like (TAM II) subset. The TAM I cluster showed a higher expression of microglia homeostatic genes and genes associated with positive regulation of T cell mediated cytotoxicity, whereas gene expression in the TAM II cluster was associated with positive regulation of cell migration. Interestingly, although both subsets demonstrated higher levels of antigen presentation in tumour-bearing compared to naïve mice, expression of genes related to macrophage activation and type I IFN signaling was decreased in both subsets at later tumour stages.

Mice lacking Acod1 displayed a higher percentage of TAMs with macrophage characteristics compared to wild type mice. What’s more, an enhanced lymphocytic population was seen in the tumours of Acod1-deficient mice versus wild type mice, suggesting increased recruitment of T cells in the Acod1-deficient tumour. Further, Acod1 deficiency correlated with a higher heterogeneity of macrophage-like TAMs, and the expansion of a macrophage-like TAM subgroup with high expression of serine proteinase inhibitors, which others have associated with T-cell immunity. Based on their findings, authors suggest that combined use of ACOD1- and immune checkpoint inhibitors could help overcome immune suppression in the TME of GBM. 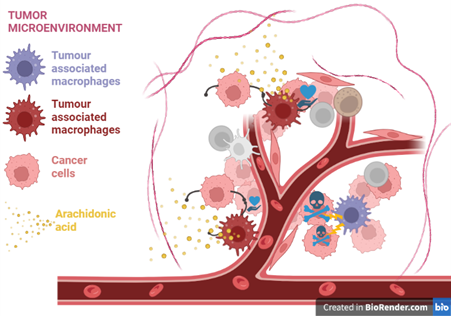 Two recent studies in Molecular Oncology have shed light onto the metabolic stimuli that tumour associated macrophages (TAMs) are exposed to in the tumour microenvironment and characterised TAM heterogeneity and functional adaptations along cancer progression.