Science is considered to be a highly specialised discipline that can be hard to grasp for a lay audience. As a consequence, the general public usually feels quite removed from science and rarely gets involved in the discussion of scientific concepts. But what if a different language were used? What if the audience were given an entirely different perspective of science?

The Institute for Research in Biomedicine (IRB) in Barcelona, Spain, initiated the Artist in Residence programme to explore this possibility. The programme provides a unique opportunity for artists to immerse themselves in the scientific community for a free exchange of ideas and to explore, learn and form relationships with scientists. Its aim is to inspire artists and scientists alike. Initially, it is just the artist and the scientist who benefit from this experience, but then, once the project has materialised and is exhibited, it extends its reach to the lay audience. ‘Our aim is to get hold of a broader audience, involve people who are not originally interested in science, and might not come to an open day that we organise’, says Muriel Arimon, Public Engagement and Science Education Officer at IRB Barcelona, who coordinates the programme. ‘If they find science within another context, they might develop a new interest in it. Once we have their attention, we can interact with them’.

The idea to create such a programme first sparked when contemporary artist Anna Rierola one day approached Joan Guinovart, at the time Director of IRB Barcelona, to enquire whether she could obtain microscopy images from researchers at IRB Barcelona for an art project she had in mind. Rierola was invited to visit the institute and interact with the scientists there. Not only did she need the images, but she also wanted to understand what they meant and how they were made. This first visit was followed by many others throughout a whole year, and that is how the Artist in Residence programme developed.

Having no scientific background, Rierola had difficulty at the beginning to comprehend the science behind the images. ‘I was focusing so much on the specific details, that I felt lost’, she explains. ‘Then I asked, what is the common point between all this? I had to zoom out, and, finally, I understood that the essence of life is integration’.

Rierola decided at that point that she wanted to represent the origins of life and development. She wished to find the balance between the biological elements and convey it to the social dimension. A sort of archaeological investigation ensued, a search for the elements and vital processes that are at the heart of the continuity of life.

‘I think my creative process was subconscious’, says Rierola, ‘until all of a sudden I found myself entangled in this garden!’ Rierola named her piece The Garden of Earthly Delights (Fig. 1A) after the 16th-century painting by Hyeronimus Bosch. Rierola’s garden, currently exhibited at the Sant Pau Art Nouveau Site in Barcelona, is a symphonic interaction between genes, molecules, cells, organs, body and environment, in which life is represented as a nonlinear dynamic process, a multitude of interconnected processes. Life, symbolised by the garden, is the harmonic integration of the parts.

Fig 1A (A) The Garden of Earthly Delights by Anna Rierola. Light box 530 cm × 430 cm; exhibited until the 30th of June at the Sant Pau Art Nouveau Site in Barcelona, in collaboration with Quo Artis.

Another basic concept behind the process of life is cooperation. A set of genes work together as a genome, a set of interconnected cells form an organ, just like individuals form a society. A living being can only thrive and propagate as an individual that is part of the collective. Life also entails creativity and innovation, since every mutation or modification is a creative process. This means freedom of action, but only within the boundaries of the network.

The Garden of Earthly Delights speaks about how we want to inhabit the garden, how we want to take care of it, also at the ethical level. What are the limits? What scientific policies do we want to follow?

To a lay audience, this work initially comes across as an imaginary, surreal dimension, but when people are told what the individual parts are (Fig. 1B–F), they are all the more surprised. ‘People are mystified to discover the elements we are made of, and this generates curiosity and an interest in biology’, comments Rierola. ‘This is what happened to me’, she adds. ‘I never really had a particular interest in science until I saw it through scientific images’.

Fig 1 B-F Selected components of the garden next to the original image and scientific explanation.

What happens when integration and cooperation are disrupted? ‘A conflict arises, subverting order into disorder, generation into degeneration. Fragmentation in biology leads to disease and death’, explains Rierola. Her idea is to create a triptych, like Hyeronimus Bosch’s Garden of Earthly Delights. It starts with the origin of life, which Rierola represented in her previous work called The Breath of Life – the generation of cells creating the web of life. The second part is The Garden of Earthly Delights, and the third, still to come, will be Hell, created by a composition of microscopy images related to disease.

Five years into the Artist in Residence programme, Muriel Arimon has observed quite a change in how scientists at IRB Barcelona respond to it. Scientists were sceptical at the beginning and very protective of their own images. They were not ready to share them with an artist they did not know, for a purpose that seemed to be beyond the scope of their studies. However, now scientists are more aware of the importance of sharing their data, as well as that of disseminating science to increase awareness in the community. Today, IRB Barcelona counts with several programme ambassadors among the institute’s scientists, who help the artists obtain the information or material they need, and in exchange learn from the artists how their own work can acquire a broader significance. Some artists have organised workshops for the scientists, to share their experience or techniques.

Stepping into the art world is more easily said than done. In order to reach a new audience, the artwork created through the IRB needs to be exhibited outside of scientific premises. IRB Barcelona found a solution by collaborating with the Art and Science foundation Quo Artis.

Led by Tatiana Kourochkina, a Russian historian born in a family of scientists, Quo Artis is a not-for-profit international organisation, based in Barcelona, that creates connections between science, art and technology and produces exhibitions, conferences and workshops related to art and science. Kourochkina was the director of an art gallery when she first came across the concept of ‘BioArt’, in 2011, through a conversation with a PhD student whose project was at the crossroads between art and biology. ‘That day I went home to research the topic, and a whole world opened to me’, she remembers. ‘I decided I wanted to invest my time in art that wasn’t just purely aesthetic, but had a scientific idea behind it. Eventually, I realised that the art gallery format was too narrow for me, so I created Quo Artis’.

The foundation mainly works on grants or uses sponsors and patrons to fund its projects. They have curated the exhibition of two of the projects from IRB Barcelona artists, securing the Sant Pau Art Nouveau Site of Barcelona as a most appropriate location. Built in the early 20th century by the modernist architect Lluis Domenech i Montaner, the Sant Pau was a hospital city for the poor comprising twelve Art Nouveau pavilions surrounded by gardens in the heart of the city. Domenech’s progressive idea was to use art and beauty, as well as the most advanced medical approaches, to heal people of any class or origin. Today, the Sant Pau is a multifaceted museum that provides an ideal setting for exhibiting multidisciplinary projects. ‘Artists and scientists can be so much more creative in solving contemporary problems of our society, if they work together’, says Kourochkina.

So, what do science and art really have in common? ‘Both science and art push the limits of mankind’, points out Anna Rierola. ‘On the one hand, to understand the world around us and how it functions, and on the other to reflect on it, on ourselves, and our society. We need to look beyond the horizon to be able to question things, to push our limits. I hope that one day scientific knowledge will be sufficiently embedded in society, to allow everyone to participate in discussions regarding scientific developments’.

How to cite this article: 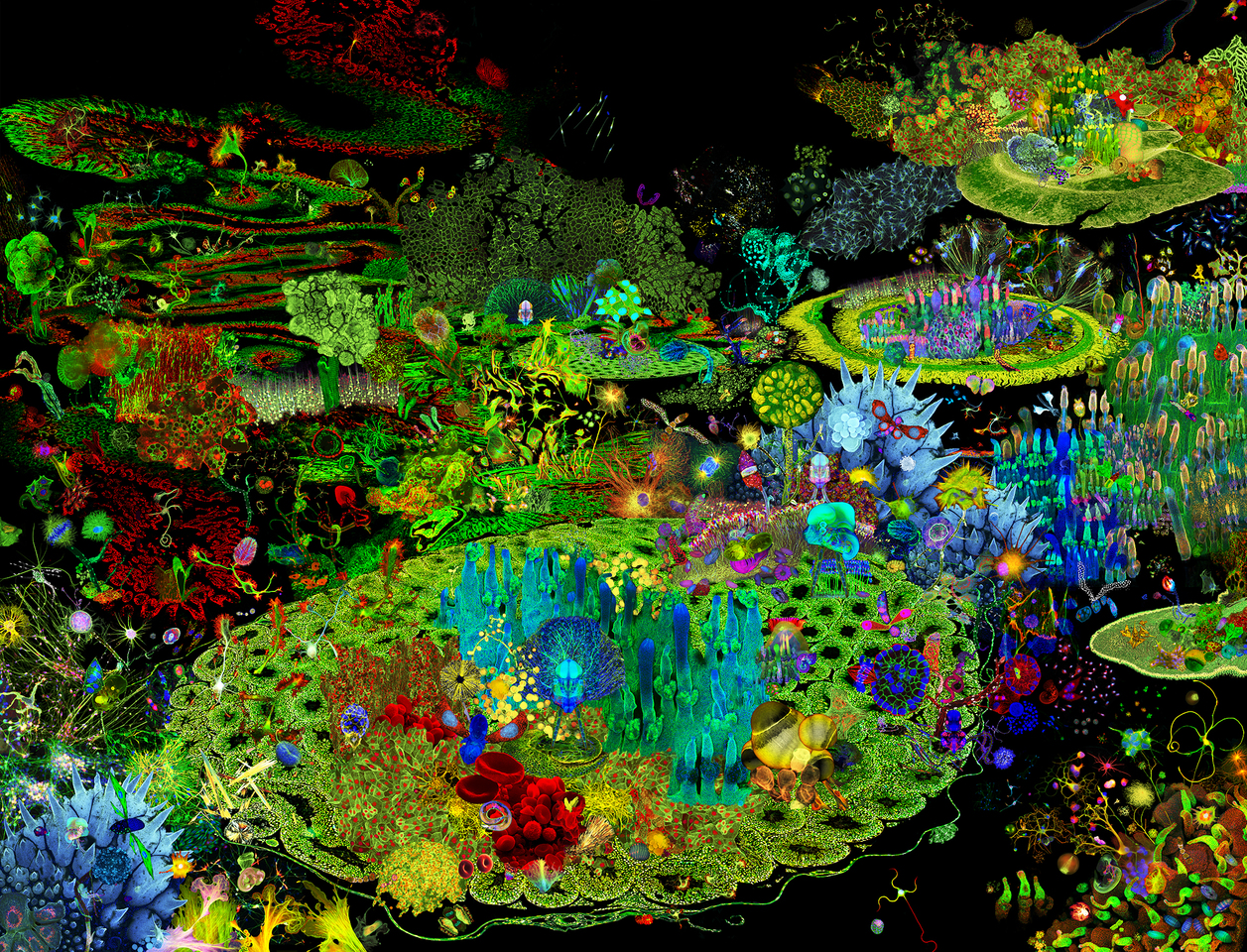