Cardiomyocytes from stems cells: Christine Mummery, who will be awarded the 2019 Datta medal from FEBS at the 44th FEBS Congress in Krakow, shares her passion for her research area and perspectives on researcher life. 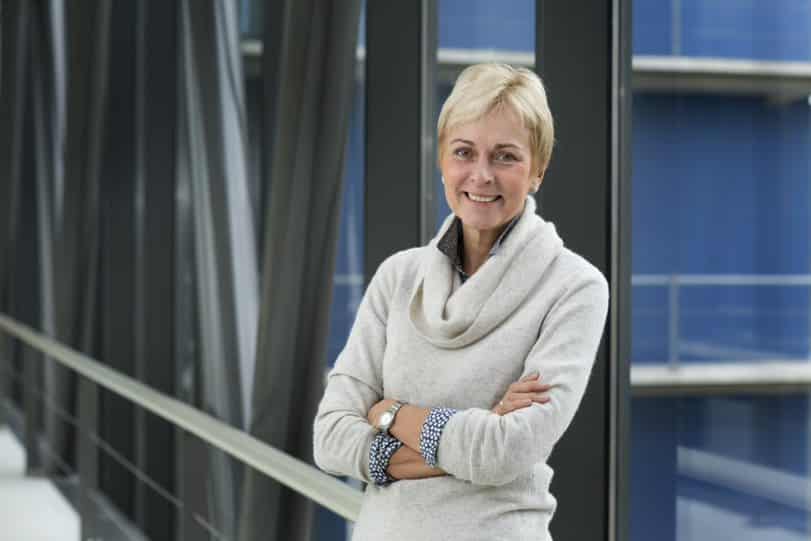 Christine Mummery has a PhD in Biophysics from the University of London, UK and was a postdoc and tenured group leader at the Hubrecht Institute, Utrecht before becoming professor at the University Medical Centre Utrecht, the Netherlands, in 2002. After a sabbatical at the Harvard Stem Cell Institute in 2007, she introduced human iPS cells to the Netherlands. In 2008, she became Professor of Developmental Biology at Leiden University Medical Centre in the Netherlands and head of the Department of Anatomy and Embryology. She is a member of the Royal Netherlands Academy of Science (KNAW), a board member and the incoming president of the International Society of Stem Cell research (ISSCR), and a former board member of the KNAW and Netherlands Medical Research Council (ZonMW). She was recently awarded the Hugo van de Poelgeest Prize for Animal Alternatives in research. She co-authored a popular book on stem cells “Stem Cells: scientific facts and fiction” and is editor of the ISSCR journal Stem Cell Reports. She is also on the editorial boards of Cell Stem Cell, Cardiovascular Research and Stem Cells.

I was always interested in lots of things and just followed up what I found most exciting. I trained as a biophysicist and found measuring things in cells challenging but fun. During my first postdoc at the Hubrecht Institute in Utrecht I worked on neuroblastoma cells that could be triggered to form electrically active neurite networks. Then I found out about embryonal carcinoma and embryonic stem cells which not only formed nerve but also another electrically active cell, the cardiomyocyte. And as it took knowledge of developmental biology to learn how to control differentiation I worked on growth factor signalling which was known to determine cell fate. When human embryonic stem cells were first described in 1998, I was ready to go, and started to differentiate those too. The first lucky shot was to derive cardiomyocytes and that’s how I ended up in cardiovascular research. When human induced pluripotent stem cells were reported, it was just a small step towards making disease models based on patient lines. So no “big plan”: just following up what I thought might be interesting (and dropping what I thought was not).

What do you see as the most important developments in your field in the past 5 years?

I think how far we have come in developing defined conditions to derive so many different cell types from pluripotent stem cells. It was amazing what a difference omitting serum from the culture medium made and how efficient differentiation now is. We were among the best when we had 5% cardiomyocytes among our differentiated cells 10 years ago and now 80% is the kind of minimum in most labs. What a difference in labour and material that makes! And not only that, in my area we can now make all the different subtypes of the heart: atrial, ventricular and pacemaker cardiomyocytes, cardiac endothelial cells and fibroblasts, epicardium… – it’s amazing. And for the brain or kidney and many other organs, it is possible to do the same. The use of Crispr/Cas9 to make genetically repaired control cells from patient hiPSCs (human induced pluripotent stem cells) where we know the causative mutation has also been a step forward.

Of course the one just submitted! That’s the way life as a scientist should be – that your favourite paper is the work you have just completed. I can name many others though: the one where we first described beating cardiomyocytes from human embryonic stem cells for example (Mummery, C. et al. Circulation 2003), or a more recent one, also in Circulation, where we describe a method for measuring cardiomyocyte contraction that can be done with movies just from a smartphone. But I also like the paper from our Australian collaborators, Dave Elliott, Andrew Elefanty and Ed Stanley (Elliott, D.A. et al. Nature Methods 2011), which characterized a cardiac reporter hESC line. We’ve used that line in a very large number of papers since.

I really like any technique you can quantify something: “Seahorse” for metabolism, electrophysiology to look at electrical activity in cells, imaging to look at contraction or where proteins are located in cells.

That we are now beginning to create complex tissues that are really able to capture disease phenotypes, not only because the right cell types for each organ can now be made but also because we have so many devices that recapitulate the physical and physiological microenvironment in vivo. Organs-on-Chip are one of these new and exciting systems. We are getting close to creating real human tissues that can be used for drug research but also for regenerative medicine.

In terms of "impacts", stem cells are now moving forward as real therapies after years of talking about what we might be able to do. Look at macular degeneration or Parkinson’s Disease: patients are already included in trials.

And what are some of the challenges?

How to make stem cell derivatives like adult cells or, even more importantly, how to model diseases that only develop late in life during aging. How to make sure the stem cell field publish only robust data than can be repeated by others. There are many papers describing methods that only work on one cell line for example. At ISSCR we set up the journal Stem Cell Reports to address exactly that as well as to serve the field. And if we think about therapies, how do we reduce the cost? We need to move away from growth factors and discover small molecules to replace them.

What might be a typical day for you and how do you find your different roles?

A typical day varies between time at the computer, answering mails, reviewing papers and grants, writing grants and grant reports, editing papers from our lab, and talking about experiments, what to do next, what worked, what didn’t work and why.

That’s the best bit – brainstorming about the results of experiments, figuring out what they might mean and planning the next steps. You have to love that, otherwise you would never keep going. I haven’t done hands-on research for many years and cannot imagine how I would find time to retrain. That was the great thing about a sabbatical: in the lab again with a student supervising what I did!

I also have some roles beyond my research group – member of the Netherlands Academy of Science, the Leducq Foundation panel, ERC panels, scientific advisory boards and journal editor – all of which are very interesting. Always something to learn.

Should biochemists / molecular biologists / cell biologists be interested in research beyond their own area nowadays?

Absolutely: we sometimes used to carry out multidisciplinary research because we had to (grants required it) but now it is often the only way to answer specific questions. Luckily discipline boundaries are becoming vaguer so that it is easier for people to look beyond their own expertise.

One thing I look for when recruiting people for my lab is skills that are different from ones we already have in the lab. We have engineers, chemists, biologists, geneticists, cell biologists…. and we now need a bioinformatician but another time it will surely be another skill we miss.

Unevenly spread between “haves” and “have nots” which is a great pity. Many brilliant young researchers cannot do top research in the home labs due to poor funding so many have to live for many years abroad rather than just a few as a postdoc. There is a lot of talent in Europe though and we are extremely lucky to have the ERC system to support much of this.

What worries you about life sciences research now?

Perhaps the huge pressure to publish in top journals which can lead to corner cutting in some labs, and great pressure on young researchers doing the experiment or leading junior groups; such publications are seen as the key to getting grants, tenure and being invited to speak at important meetings but it deters from in depth investment. Who can spend 5 years developing something when grants are mostly for 3 or 4 years?

Christine Mummery's research concerns heart development and the differentiation of pluripotent human stem cells into the cardiac and vascular lineages and using these cells as disease models, for safety pharmacology and drug discovery. Immediate interests are on developing biophysical techniques for characterization and functional analysis of cardiovascular cells from hPSCs. In 2015 she became guest professor at the Technical University of Twente to develop organ-on-chip models. She was recently awarded a multimillion grant for this purpose and is awardee of a prestigious European Research Council Advanced Grant.

The Datta medal is awarded annually by FEBS for outstanding achievements in Biochemistry and Molecular Biology or related sciences: https://www.febs.org/our-activities/awards/medals/

Christine Mummery will be presented with the medal at the 44th FEBS Congress in Krakow, Poland on Monday 8th July where she will deliver a lecture on ‘Human pluripotent stem cell models of cardiac and vascular disease’:  2019.febscongress.org

Csaba Szabo: “I like to tackle big, unsolved medical problems – the bigger the better”

'FEBS Communications' posts general items from the FEBS Network Team as well as news on FEBS events and other activities.
Follow

A little vitamin D a day, could keep COVID-19 at bay

The FEBS Journal
Radiation Oncology: towards a mission-oriented approach
RESEARCH

Radiation Oncology: towards a mission-oriented approach