On this post, IUBMB's President Alexandra Newton highlights what they set out to achieve this last year and how they are supporting trainees across the world.
The International Union of Biochemistry and Molecular Biology
Follow
Like Be the first to like this
0

A 2:00 am alarm on July 15, 2021 signaled me to get ready for the unprecedented virtual 25th IUBMB Ordinary General Assembly. The predawn start time in San Diego was chosen to optimize the attendance of delegates from around the world – early afternoon in Africa/Europe and late night in Oceania/Asia. Delegates from around the world live streamed in to participate in the triennial reports, business meeting, voting, and culminating in handing over the baton from then President Andrew H.-J. Wang, Taiwan, to me.

One year later, I took the stage at a very civilized time in beautiful, but hot, Lisbon, to welcome over 1,500 biomolecular scientists from around the world to the pandemic-delayed 25th IUBMB-FEBS-PABMB Congress. We shared science, forged collaborations, and made new friends. I especially enjoyed meeting so many talented trainees from around the world, meeting the FEBS leadership, and working with my wonderful IUBMB colleagues who volunteer their time tirelessly to help biochemists and molecular biologists around the world. It was the first time I had met our undaunted Secretariat Charysse Austria (Canada) and General Secretary Iqbal Parker (South Africa), with whom I’d been e-interacting on a nearly daily basis for the past year. It’s been a remarkable year so what better time for some highlights of what we’ve achieved?

What have we done?

In my first President’s Message in our biannual Newsletter, I outlined three priorities: 1] give trainees around the world a voice at the IUBMB by creating a Trainee Initiative, 2] increase membership and visibility, particularly in Africa, and 3] undertake a fund-raising campaign to provide more resources to the next generation of biomolecular scientists. With a lot of passion, commitment, and community engagement, we’ve made great strides, as I’ll outline below.

I’m very pleased to report that the IUBMB Trainee Initiative was created in early 2021, following a Zoom meeting to which I invited a core group of trainees I had met through various IUBMB activities, to brain storm on how to make this initiative work. They included our Trainee Ambassador, Bri Bibel (you can read here how we met), our inaugural Whelan Young Investigator Awardee, Elyse Fischer, Alex Röntgen and Patrick Penndorf, who were already involved in the FEBS Junior Section Initiative, and a few other students I’d had the privilege of meeting in seminars I had given, or through IUBMB activities/fellowships. I am grateful to Fiona Veira-McTiernan of the FEBS Communication Team for invaluable advice and suggestions as we set the initiative in motion.

And what a group! Within a week, they had voted for a Chair and co-Chair, set up a Slack account for communication, made social media accounts, worked with our General Secretary to write Terms of Reference, had their own IUBMB email account and page on the IUBMB website, and were soliciting applications for members of the leadership team from each geographical region. Their goal was to have an online event every two months, rotating among the four geographical regions. They did not lose any time - their first event (hosted by the FEBS team) was held in March 2021 – a huge success by any standards, attended by trainees in 31 countries. Entitled the Fun Side of Structural Biology, it covered protein folding and the game Foldit – with David Baker and Brian Koepnick, who even put a special IUBMB protein folding puzzle on the Foldit website. If you missed this, or the next two – Africa’s The Great Decode (FASBMB) and The Graduate School Road Map (FAOBMB) – you can find them here.

How did we succeed in putting the Trainee Initiative in place so quickly and with such great results? The key was identifying a core group of trainees with strong leadership skills, a true love of biochemistry, and a passion to help others. In addition, we provided the online resources for the trainees to reach out to others, host events, and have a dedicated trainee initiative email account. We also responded quickly to their ideas and promoted their efforts in any way we could.

We thank Sannie Culbertson, the editor of Trends in Biochemical Sciences, for giving them a voice in this must-read journal for biochemists (coincidentally founded for IUBMB by Bill Whelan, who had a lifelong commitment to training biochemists). Not only is the IUBMB Trainee Initiative featured on the journal home page, but the TrendsTalk of the July issue presents the vision of Chair Elyse Fischer (FEBS), co-Chair Osvaldo Contreras (FAOBMB), Bri Bibel (PABMB), and Victoria Patten (FASBMB). We hope the IUBMB Trainee Initiative will serve as a model for our constituent biochemical societies to give trainees a voice, adding to the other initiatives in place such as the FEBS Junior Initiative. Trainees are our future!

I’m also very pleased to report that we have begun to put in place the IUBMB Africa Initiative. For starters, we are providing funds to send trainees from Africa to the FEBS-IUBMB-ENABLE conference, to the Young Scientist Forum preceding FEBS meetings, and to the Young Scientists Program preceding the IUBMB Congresses. Additionally, we are working with FEBS to put in place a program to allow students from Africa to visit labs in Europe, which we hope to launch in 2023. As with the Trainee Initiative, talking to trainees from Africa was influential in developing the IUBMB Africa Initiative. Dario Alessi, President elect, and I learned so much from talking to John Teibo and Olorunfemi Molehin, as outlined in a recent FEBS Network post.

We have also put in place a new program, Relocation Support for Displaced Trainees, to support graduate students and postdoctoral fellows displaced from their labs because of natural disasters, war, or other events beyond their control that interrupt their training.

Our next major goal is a fund-raising campaign to allow us to provide even more opportunities. To this end, we have put in place a donation platform on our website. Here you can make charitable donations to the IUBMB (either as US or Europe tax deduction) with 100% of your funds going directly to our programs. This is because the leadership of the IUBMB is 100% on a volunteer basis, so any donation is directed straight to the activities the donor is interested in.

It's been an exciting year, with many new initiatives and also lots of fun thrown in (have you written an amino acid poem yet for our contest to win our Trainee Ambassador Bri Bibel’s amino acid puzzle? Submit to [email protected]).

The International Union of Biochemistry and Molecular Biology
Follow

The International Union of Biochemistry and Molecular Biology unites scientists in 75 countries or regions through a society, national council, or academy of sciences. 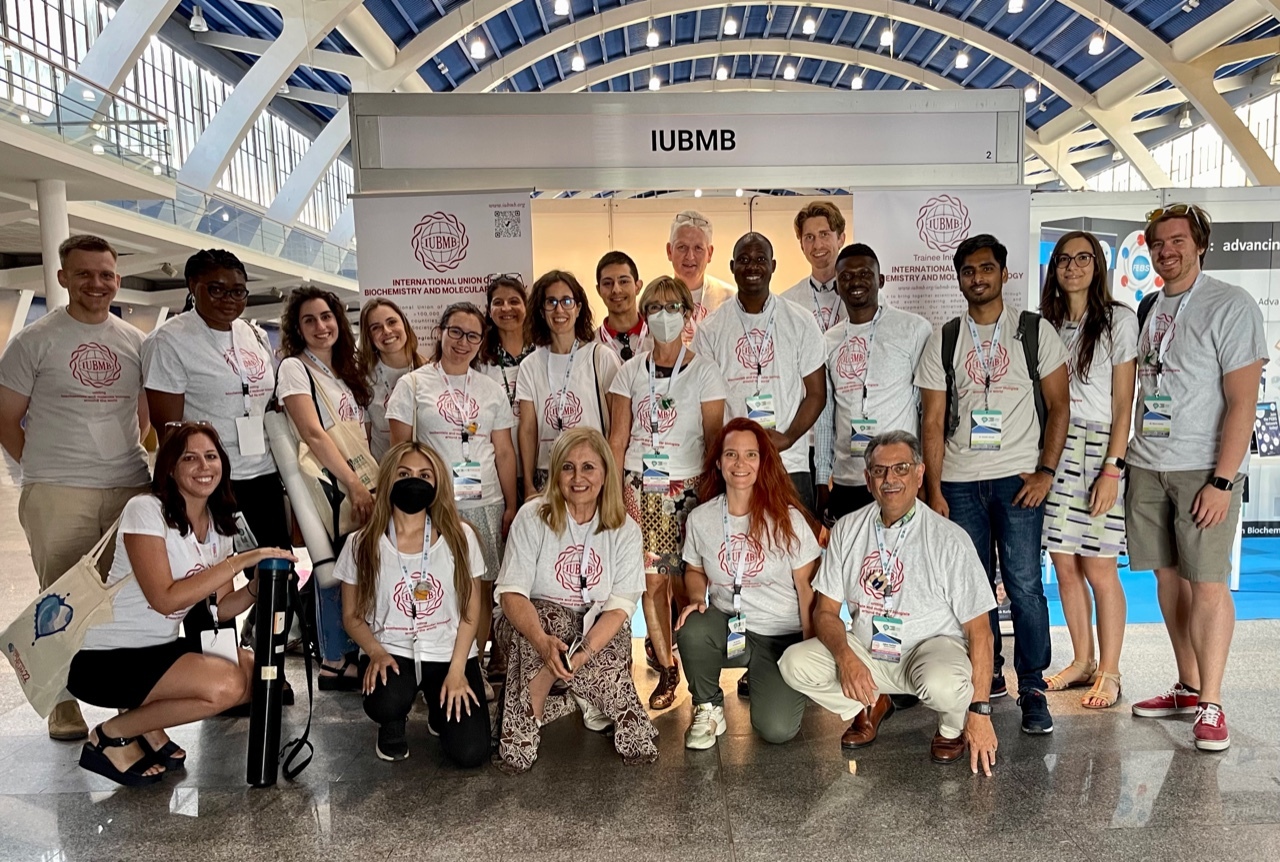 On this post, IUBMB's President Alexandra Newton highlights what they set out to achieve this last year and how they are supporting trainees across the world.