…when it’s not their child, that is.

The sheer bliss, that flooding surge of relief and recognition that comes from seeing some poor mother/father/couple struggling with a berserk sprog. Oh thank goodness, you sigh inwardly with profound and sincere joy, it’s not just us that has that problem then.

There are many wonderful and noteworthy things about the transition from babyhood to childhood, but one of the less welcome changes is that just “crying” becomes tantrums. A child’s attempt to exert their own will, but without the benefit of being able to control their emotions (a trait that, regrettably, lasts some people their whole lives).

Screaming babies are hard enough in public situations, especially if they refuse to take a dummy (or “pacifier”, to use the more paramilitary North American lingo). When they kick off on public transport or in a shop, it’s usually only a matter of time before some well-meaning grandmother will, with a pitying smile, suggest that the child needs a dummy, or a cuddle, or something else. Advice that’s often delivered with a sympathetic sermon about what worked with their own offspring a generation earlier.

We know you’re trying to help, and we know that you’re motivated – in most cases – by a genuine and sympathetic desire to salve distress, but there’s absolutely no way to deliver that kind of advice, in that situation, without looking like the most supercilious, self-righteous, sanctimonious self-proclaimed world expert of all time. Especially when you’re dealing with two stressed young parents who hadn’t expected buying a new pair of shoes to turn into a hostage negotiation situation where the kidnapper/victim has their hand – or vocal chords, rather – on a multidecibel-level sonic cannon.

But even those trials suddenly seem fairly straightforward when the infant has become a toddler or small child. The unpredictable but fairly narrow-bandwidth sound cannon, a baby’s only real means of lashing out, gets replaced by a full spectrum of sonic and behavioural weapons wielded capriciously by some kind of protean gremlin who only five minutes earlier was smiling angelically. Screaming, accusations, sit-down protests, tears, physical attacks, or lashing out at objects around them are just a fragment of the various tortures on offer.

From the outside, it’s often heart-rending to see young parents innocently and blindly reaching this stage of their evolving relationship with their own offspring.

They’re easy to spot: wild-eyed couples with sickly, panicky grins squatting down and talking quickly in a desperate low tone while the organic bomb that they’ve made works itself up to detonation. The pain and bafflement in their eyes when the child lets rip. “How can this be happening to us? What did we do wrong?” The hot flush of shame that follows as they realise how many strangers are staring at them with a mixture of amusement, pity, and disdain.

Or there’s the later-stage rearers. The ones who’ve become battle-hardened, less uncomfortable at the glances of passers-by. The ones who’ve realised that sometimes the only difference between parenting and forcible child abduction is your biological relationship to the child you’re wrestling into a carseat (“BUT I WANT TO LOOK AT THE TOY-OY-OY-OYS!!!”).

You can’t stay at home. You can’t avoid public appearances through fear of being humiliated. You’ve got to keep at it and toughen up. And when you have, when you’re out either as a family or alone, you can look at the newer parents on the same road and see their Disney dreams of white-bread parenting being dashed into the pavement. 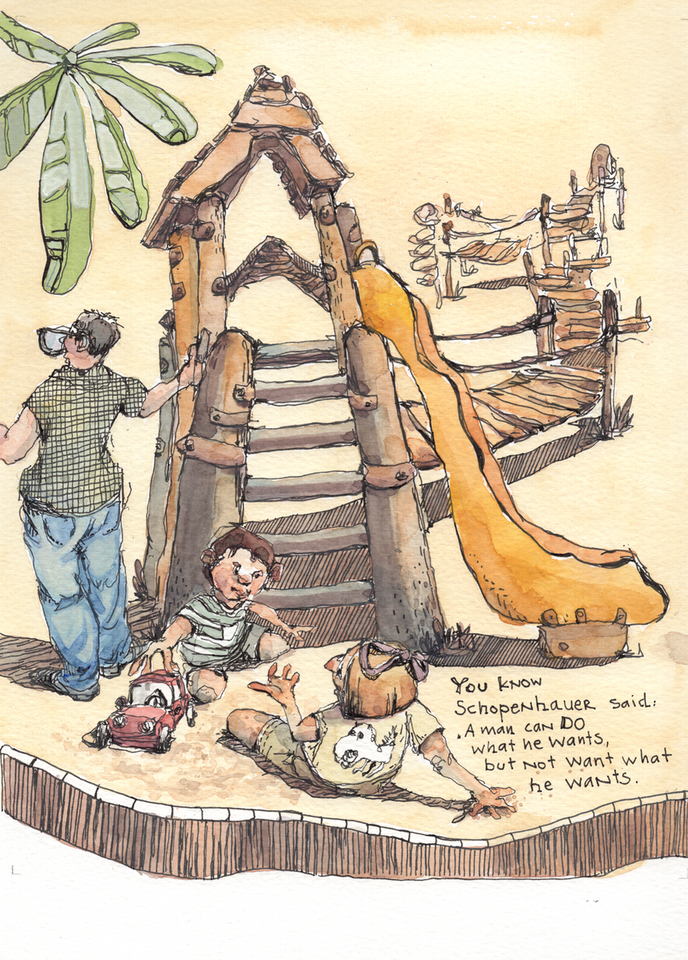