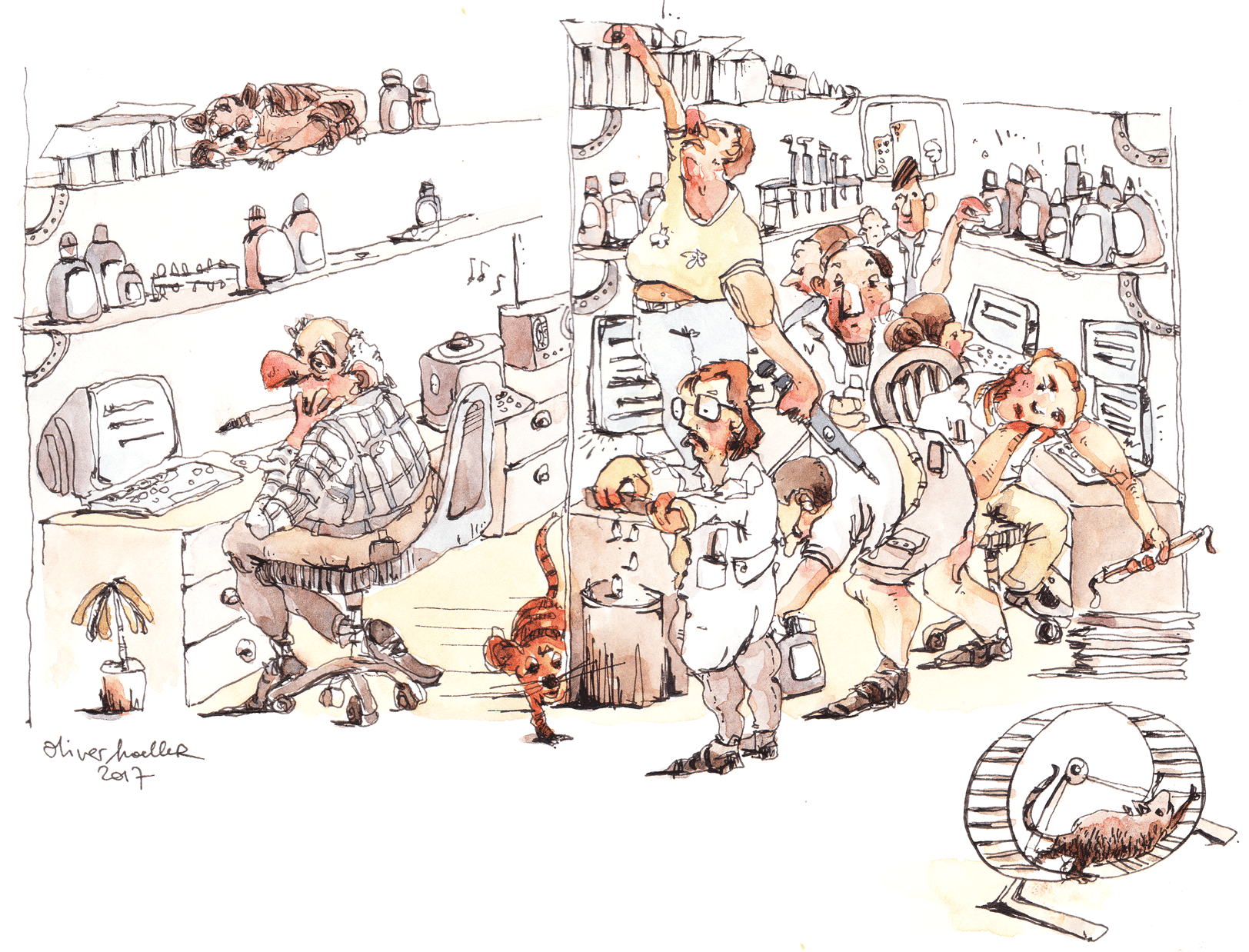 There’s a passage in “Lark Rise to Candleford”, Flora Thompson’s eloquent eulogy to pre-industrial Britain, where she recounts staying near Northampton with an aunt. Her aunt’s husband is a shoemaker, one of the many independent artisans of the time plying his trade in laces and leather.

The class to which she and her husband belonged is now extinct. Had Uncle Tom lived in these days, he would probably have been manager of a branch of one of the chain stores, handling machine-made footwear he had not seen until it came from the factory. Earning a good salary, perhaps, but subject to several intermediary “superiors” between himself and the head of the firm and without personal responsibility for, or pride in, the goods he handled: a craftsman turned into a salesman.

While the era of mass production swept away the commercial artisans in favour of large teams of factory workers, it’s interesting that the same phenomenon has not yet occurred in the biological sciences. Science still, publicly at least, advocates the small, independent research group as the optimal unit for carrying out investigation. Small teams of postdocs and students, headed by independent group leaders who are themselves not too divorced from the bench. The scientist as artisan.

For all the public noises made in defence of small groups though, it’s worth noting that ever since the Human Genome Project the biological sciences have been seeking to emulate the large collaborative projects that have typified experimental physics in the modern era. Mars rovers, LIGOs and Large Hadron Colliders are now complemented by BRAIN initiatives, multi-genome projects, and Cancer Moonshots. The advent of Systems Biology as a mature discipline and the high-octane allure of Big Data only add to the impression that this is the direction biology needs to go in if it wishes to keep up.

Not only that, but despite all the supportive noises made on-air about championing small research groups that collaborate intensively, the reality on the ground tends to look somewhat different. A quick look through the personnel for any department or institute will reveal that large groups of 20 or more people remain very common, and it’s competition, not collaboration, that is reaching unsustainable levels in the research environment.

But his day was still that of the small business man who might work by his own methods at his own rate for his own hours and, afterwards, enjoy the fruits of his labour and skill, both in the way of satisfaction in having turned out good things, and in that of such comforts for himself and his family as his profits could afford. What these profits should be, his customers decided; if he could please them they came again and again and sent others and that meant success. Except his own conscience as a craftsman, he had nothing but his customers to consider.

Big groups can, of course, tackle absolutely any problem that a small group can and many other problems – due purely to scale – that small groups cannot. Why then have the artisans not yet been replaced, and why are they still publicly defended? Why are we not turning our departments into data factories?

Partly it’s personal. Big groups look like a great idea if you’re in charge of them, but that doesn’t necessarily make them a great place to train and they leave a lot fewer independent positions available. The glut of postdocs and the widespread feelings of frustration and powerlessness within that community are already testimony to the fact that there are currently more people who wish to be independent than there are independent positions, so the line of recruitment to those coveted positions of authority is far from clear. Turning scientists into assembly-line employees in data factories or chain store data output managers also runs counter to many of the inclinations that draws people to research in the first place – not least the wish to slake one’s own curiosity through one’s own endeavours.

It’s also practical. Big groups are powerful, but a plethora of small groups can cover a greater diversity of scientific questions than a smaller assembly of several hulking ones. And one of the enduring joys of research is that no matter what you may think is important, a world-changing discovery can come from the most unexpected and unpredictable of places – so it makes sense to sample as much of the diversity as possible. Shakespeare’s Apothecary humbly noted that “In Nature’s infinite book of secrecy, a little can I read”, and it’s a creed that applies to all scientists regardless of the number of underlings they can sway.

In science at least, the artisan still has a place.

Superheroes of the lab - a spotter's guide
EARLY-CAREER SCIENTIST

Superheroes of the lab - a spotter's guide

Brooke Morriswood
So, do you want to be a PI?
EARLY-CAREER SCIENTIST

Andreas Mayer
FEBS Network
We use cookies to help improve your experience. By continuing to browse our website you are consenting to our use of cookies.
Learn more